Insane Mobility and Unparalleled Parkour With a Feudal Japanese Aesthetic

The wait is over–as of today, the chaotic but gorgeous 60 player Battle Royale experience known as Naraka: Bladepoint is available for all players on Steam. Console versions of Naraka: Bladepoint will be out later, but PC owners can already enjoy the glory of unrestricted motion, an incredible three-dimensional parkour system, and more possible fighting styles than you can shake a stick at.

The full release of Naraka: Bladepoint adds map alterations, further optimizations, and two new weapons in the form of a fiery chainsaw and a dagger. Even better, fans of the Onmyoji franchise will be happy to see the sword spirit Yoto Hime added as a possible fighter–and the devs gave her a chance to show off her skills in the game’s fast-paced launch gameplay trailer.

The video showcases some of the many features we can look forward to seeing in Naraka: Bladepoint, including demonstrations of the weapons and associated fighting styles–Yoto Hime included. It also shows off the in-game environments and how a sufficiently imaginative player could grapple between buildings, run along the side of walls, or use huge, dangling chains as a shortcut across the battlefield.

One of Naraka: Bladepoint’s main draws is the dynamic verticality it offers, allowing battles to include rapid ascension and descending as well as dodging, rolls, and other forms of swift horizontal movement. The result is a flowing and fast-paced combat system that goes out of its way to incorporate the game’s world.

In the trailer, players are shown using a giant serpent in the sky and strategic damage to objects like lanterns and waterwheels to great effect. These out-of-the-box tactics can be every bit as deadly as transforming into super modes and using lethal special moves.

Naraka: Bladepoint’s trailer does an excellent job of making both head-to-head melee combat and long-distance sniping at other players look incredibly fun, especially since the game’s movement system allows a potential sniping target to close the distance between them and an attacker quickly. All in all, it looks like a good way to get your daily fix of high-octane Battle Royale action. 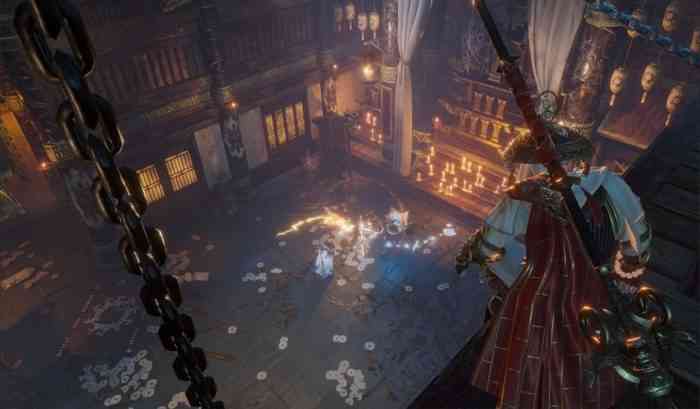 What’s your favorite Battle Royale game? Let us know down in the comments, or hit us up on Twitter or Facebook.