It’s been a hot decade since we had a new Duke Nukem game. Since the series is made entirely of late-90s/early-2000s stereotypes of the male fantasy, we may be better off without it. *cue outrage from men in their early 30s, who are still in their teenage longhair phase* 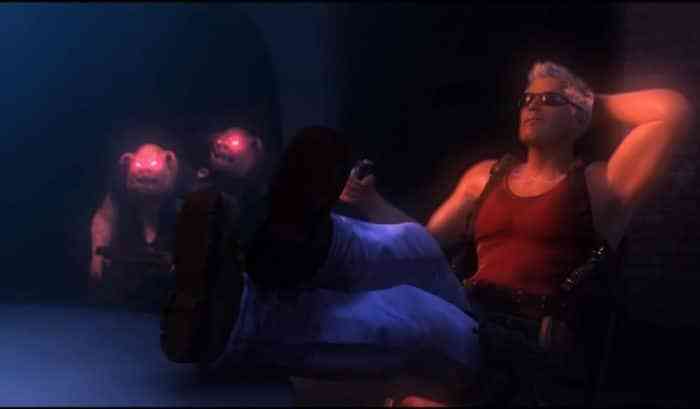 There have been plenty of cancelled Duke Nukem games and one of the animators from Gearbox who was working on one of them released some cinematic footage. The cancelled game was an origins story called Duke Nukem Begins, likely parodying Batman Begins, which was released around the time it was in development.

Of course, this game was never finished and it was over a decade ago since it was last worked on, so of course it looks pretty rough by today’s standards. From what appears to be the gameplay, Duke Nukem Begins was set to be a on-rails shooter, where Duke shoots monsters and aliens with a variety of high-powered tools of destruction.

We also see Duke fighting on top of the White House and flying with a jetpack, as a kaiju swings the Eiffel Tower at him. You know, just regular Nukem stuff.

There also appears to have been a multiplayer aspect planned for Duke Nukem Begins. At one point, Duke summons different color variations of himself to fight pig-monsters alongside.

There have been hardcore Duke Nukem fans wanting a new game, so maybe the release of this footage will light a fire under the community, but we will see. Duke Nukem Begins will probably not ever be released for modern platforms.

Would you like to see a new Duken Nukem game? Let us know in the comments below.