This is the Game’s Final Lords Pack

The final Lords pack for Total War: Warhammer 2 has dropped today and it brought an ominous release trailer with it. This DLC pack brings 2 new Legendary Lords, the rampaging Doombull Taurox and the elusive Lizardman Oxyotl, both of whom are heading straight for the Heart of the Dark to determine the fate of all living things.

Taurox is a nigh-invulnerable champion of Chaos whose body is almost entirely covered in brass, with only one spot at his neck still vulnerable. He believes that if he completes a horrific ritual at the Heart of the Dark and unleashes Chaos upon the world, he will become unstoppable. This trailer does a good job of showing exactly how bad that would be.

Oxyotl is every bit as terrifying despite being a staunch enemy of Chaos. An uncanny mix of Chameleon Skink and Lizardman, this stealth-focused Lord uses his ability to sense Chaos to revive Silent Sanctums hidden throughout the world and gain the power required to stop Taurox in his tracks.

Also featured in this pack are 9 new units joining the ranks of the Beastmen and Lizardmen races, including the fusion monster Jabberslythe, the enormous multi-limbed Ghorgon, and the ferocious twin-tailed Troglodon. Additionally, the pack is bringing Old World Updates for both the Beastmen and Dwarf races, overhauling many features for both races.

As if all of this wasn’t enough, Total War: Warhammer 2 is also adding some free content, including new Lords for the Beastmen and Dwarfs in the form of The Great Bray Shaman and Thorek Ironbrow. Thorek in particular is bringing the Dwarfs into the Eye of the Vortex campaign for the very first time, which is pretty great for Dwarf fans.

On top of that, five units of Ogre Mercenaries will now be available to every faction in the game. If you cause enough destruction, you may prove yourself worthy of leading them into battle. This pack seems like a great send-off to Total War: Warhammer 2 now that Total War: Warhammer 3 is on the horizon. 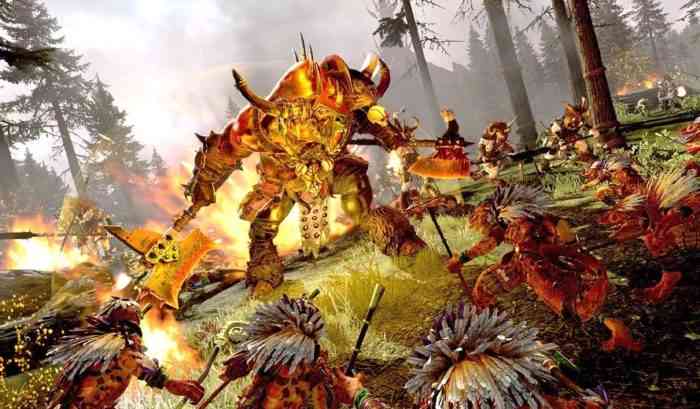 Are you familiar with the totality of war? Let us know down in the comments, or hit us up on Twitter or Facebook.