Secretlab, an award-winning company that is the top choice for gaming chairs in the world of gaming, has consistently utilized its proprietary technology and innovations to provide comfort to gamers. The company, along with Riot Games, have collaborated to provide the fans of League of Legends with themed gaming chairs as the League of Legends Ruination Collection is ready to launch.

The companies put their minds together to create gaming chairs using the unique elements, armor, and lore of Viego, Miss Fortune, and Pyke. 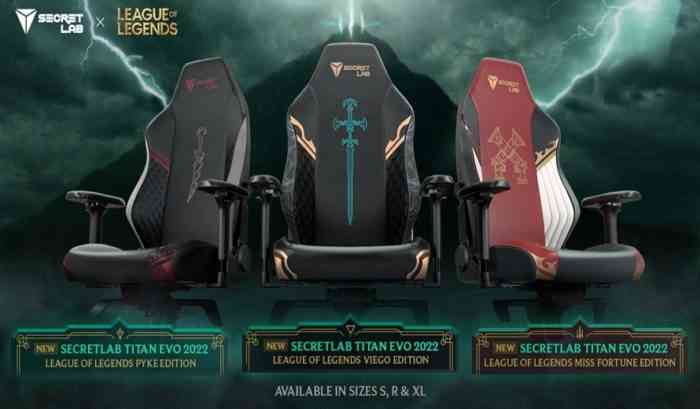 The phenomenon of League of Legends has now surpassed expectations as it has made its name in the mobile gaming industry, comic books, short stories and an upcoming Netflix series, Arcane. The world of Runeterra is vast and fans have are always invited to explore it via different forms of media.

In the Viego Edition, the Blade of the Ruined King is embroidered into the backrest as players command the Black Mist to defeat foes while the Pyke Edition takes inspiration from the depths of the ocean featuring the hero’s distinctive scales on its side wings. In the Miss Fortune Edition, the Bilgewater captain is brought to life as the chair showcases her iconic pistols in deep red leatherette.

Ian Ang, co-founder of Secretlabs, spoke highly of the partnership between the companies stating, “We’ve worked closely with Riot Games over the years to keep both pro players and fans comfortable, supporting the biggest regional leagues, global tournaments and each major milestone in the League of Legends universe with custom-designed seats. This meant we couldn’t go without creating chairs to mark the arrival of Viego and the Black Mist. Our designers enjoyed every moment spent immersing themselves in League of Legends’ rich lore once again to perfect even the smallest design elements and ensure our chairs faithfully recreate the spirit and aesthetic of their respective champions.”

The chairs can be purchased here.

What are your thoughts on gaming chairs? Are you interested in purchasing these League of Legends Themed Chairs? Let us know in the comments below or on Twitter and Facebook.


League of Legends Cracks Down on AFK Players With New Policy