Assassin’s Creed Valhalla Orlog Board Game Is Being Made

There are a few minigames sprinkled throughout the Assassin’s Creed series, some of which are actual board games in real life that we don’t play. In the most recent entry, Assassin’s Creed Valhalla, we are introduced to a new board game called Orlog.

Orlog was not a real game that Norse or Saxons played back in the day, but that does not mean it’s not real. Ubisoft has officially licensed an Orlog board game, which is being made by Pure Arts. They are holding a Kickstarter campaign right now and it has already reached its goal six times over. 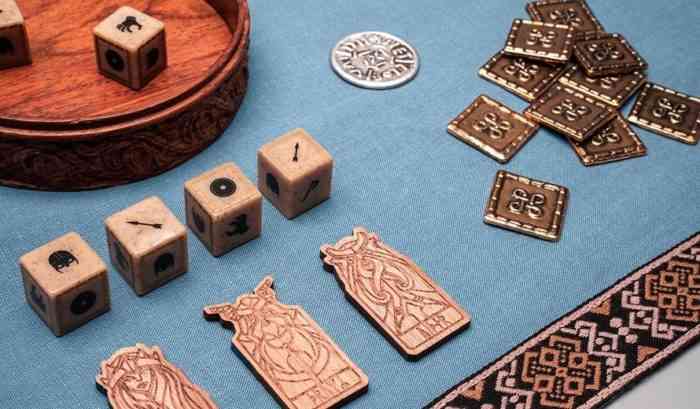 The board game will come with all the pieces that you would have in Assassin’s Creed Valhalla, as well as two sets of God Favor Cards, which you would have to collect in the game. There are also a bunch of stretch goals that have all been reached already.

With the stretch goals achieved, the dice will be glow in the dark, the player coin will be metal, the life stones will be actual stones instead of cardboard, plastic game piece bags will be replaced with linen pouches, and each set will come with an Orlog champion coin and tournament bracket cards.

There are a couple of different editions that backers can buy as well. The regular edition comes with all the necessary pieces in the game box. The Tavern Edition comes with everything, plus a linen game mat and a wooden drinking horn replica with a stand. It is unclear if you could actually drink mead out of it, but it looks cool.

The regular edition costs $39 and the Tavern Edition costs $199, which can be bought by contributing to the Kickstarter. Pledges can be made until sometime in November and the board game will hopefully ship in December. Assassin’s Creed Valhalla is available on PC, PS4, PS5, Xbox One, Xbox Series X|S, Amazon Luna, and Stadia.

Will you back this Kickstarter for a game of Orlog? Let us know in the comments below.