We’ve already gotten a look at the stunning post-apocalyptic coming of age story that is Sable, the debut title from London-based developers Shedworks, but as the Summer of Gaming ramps up we’ve been given a whole 13 minutes of new gameplay to pore over. 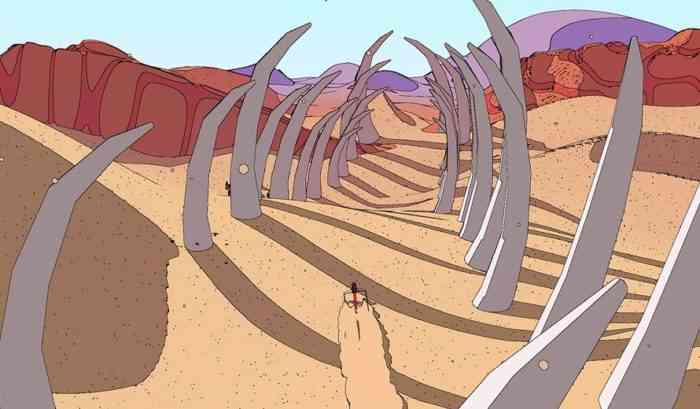 Sable follows the titular heroine Sable’s journey across a mysterious, desolate landscape, peppered with the bones of ancient monsters, long-abandoned spaceships and ruins that may hold the secrets behind the world. The new gameplay shows off the start of the game, with Sable’s adventure beginning in one such ruin. As she climbs out into the wider world, we get a look at perhaps the game’s main selling point – its cartoonish, brightly-coloured art style. Inspired by legendary comic book artist Moebius, there’s a real sense of artistry behind Sable’s aesthetic. A purposefully low frame rate adds to this cartoony style, as Sable’s animations are just jumpy enough to make the intent clear without detracting from gameplay.

You can check out the new 13 minutes of gameplay here:

There’s a clear inspiration from The Legend of Zelda: Breath of the Wild at work here, as there is in most open-world adventures released since Breath of the Wild’s massive success. The setting of a destroyed world full of ancient technology, the focus on environmental storytelling and even the gliding mechanics will certainly bring back memories of Link’s most recent adventure. However, there’s plenty here to set it apart from the crowd – For example, rather than the typical silent protagonist, we see that Sable actually narrates throughout conversations, giving us more insight into her character and how she understands the world. Another big difference is the combat mechanics – there are none. Sable is a game dedicated entirely to exploring the desert along the main character’s journey to complete her rite of passage and prove herself to her people.

Sable is scheduled to launch on PC, Xbox One and Xbox X/S later in 2021.

Our First Look At Warhammer Age of Sigmar: Tempestfall Gameplay
Next
Naraka: Bladepoint Will Take the Stage at E3 2021
Previous
Ubisoft Sets Sights on 2022 For Prince of Persia Remake