A Coming of Age Story With a Difference

Coming of Age stories are popping up more and more frequently in gaming, but rarely as the focal point of the story. The Last of Us had Ellie slowly growing into maturity over the course of the story, but the focus was on her growing relationship with Joel. Life is Strange 2 had Sean slowly growing up and taking responsibility for his actions, but that takes a backseat to dealing with his younger brother’s superpowers. 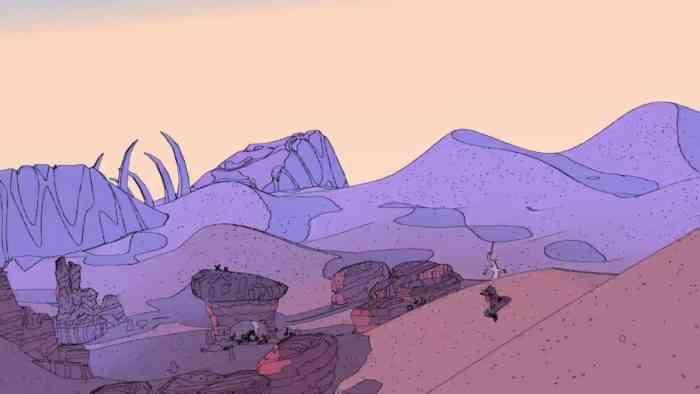 The thing is, the coming of age story isn’t often the focus in games because it doesn’t necessarily make for the most engaging gameplay. It’s something that happens along the way as the characters are saving the world or fighting the Yakuza or taking down a conspiracy.

Shedwork’s new game- published by Raw Fury- immediately stands out because it’s explicitly a Coming-of-Age story, albeit like most games in the genre the backdrop is anything but normal.

While we don’t know the details of the story we know that the setting is a post-apocalyptic desert, dotted with ancient ruins and crashed spaceships. Sable is free to explore, climbing and gliding around the vast landscape as she seeks to unearth long-forgotten mysteries. There’s also nomads that you can help- or not- among the way.

Like many open-world games, Sable is filled with sidequests and puzzles that you can either complete or ignore, as you see fit. With a soundtrack by acclaimed indie artist Japanese Breakfast that has a heavy emphasis on chill, the game’s just as conducive to exploring the landscape without distraction.

As for how the game looks it’s certainly stylish, animated in the ligne claire style popularized by The Adventures of Tintin. It won’t be for everyone, but given that some of the greatest games of all time have experimented with unusual art styles (Like the sublime Okami) Sable may well find its audience.

Will you be checking out Sable? Hit us up on Twitter, Facebook, or down in the comments to let us know.