It finally happened: a new Jurassic Park game–or rather, a new Jurassic World game–has been announced at Summer Game Fest, and the word came straight from Jeff Goldblum himself. The actor appeared on stream in a leather jacket as per his iconic role as mathematician Ian Malcolm in the original Jurassic Park film. He then dramatically read the game announcement in Malcolm’s intense and halting tones, challenging players to “control chaos” in a world that has evolved. The video then switched from his face to show the shadow of a pterosaur taking off. This unsubtle reference soon revealed the upcoming title as Jurassic World Evolution 2, the sequel to Jurassic World Evolution, a construction and management game that challenged players to keep the Jurassic World park running.

The original game asked players to manage exhibits, design custom dinosaurs like the Indominus Rex, and build for security, science, or entertainment–all while trying to make sure the dinosaurs don’t escape and eat anyone. Judging by Goldblum’s ominous choice of words during the announcement, Jurassic World Evolution 2 will take this uneasy premise and push it further. The trailer warns that humans have forgotten lessons, abused their power, and played with genetics like it was a toy. They weren’t careful, and now, here they are: surrounded by incredibly powerful, gorgeously-realized prehistoric reptiles, all while a somber cover of the classic Jurassic Park theme plays in the background. Needless to say, we’re excited.

At the very end, the announcement trailer shows us a glimpse of an aquatic reptile, possibly a mosasaur, suggesting that marine reptiles will be available in this rendition of Jurassic World. We’re huge fans of mosasaurs, so this little reveal had us vibrating in our seats. We can’t wait to see more, and it looks like we won’t have to wait long, as Jurassic World Evolution 2 will be coming out later this year. 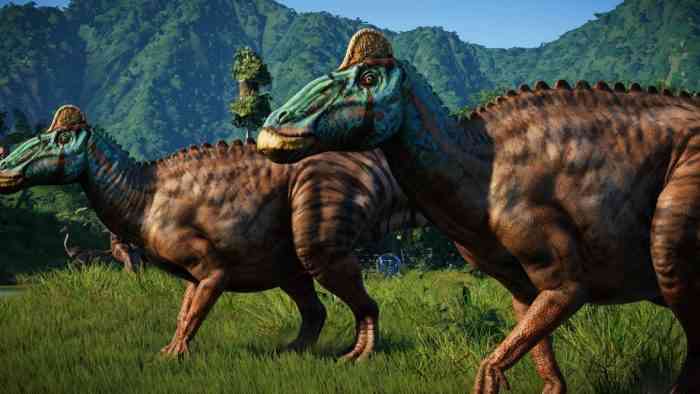 Are you ready to return to Jurassic World? Let us know down in the comments, or hit us up on Twitter or Facebook.