The first-person co-operative pirate simulator Sea of Thieves has been going from strength to strength since leaving early access – coming to Steam in 2020 caused a huge surge in player numbers, and between a number of successful updates and a newfound public eye thanks to the recent sea shanty fad, leaving Sea of Thieves doing very well indeed. Now, though, the game is set to get its biggest update yet, featuring a few familiar faces. 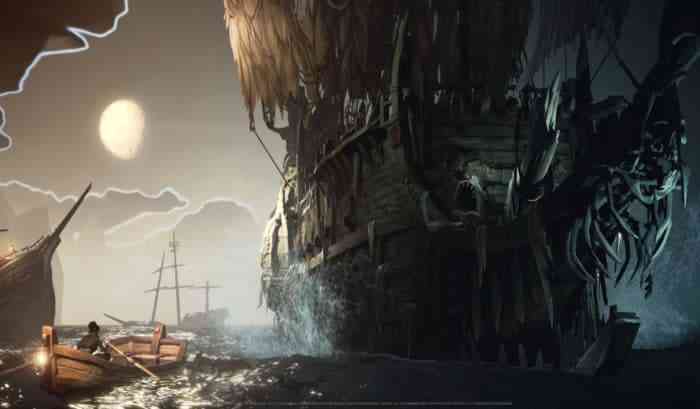 The upcoming Season Three update will include A Pirate’s Life – a crossover between Sea of Thieves and Disney’s Pirates of the Caribbean movie franchise. A new set of Tall Tales will bring the infamous Captain Jack Sparrow and the rest of the Black Pearl’s crew over the horizon to lead players on a brand-new adventure. Along the way, they’ll meet plenty of characters from the Pirates of the Caribbean series, from Calypso to the dreaded king of the seven seas, Davy Jones. The reveal trailer, shown off at this year’s Xbox/Bethesda E3 showcase, displays some impressive impressions by the voice cast, along with a glimpse of what the crossover’s plot will be:

Along with the reveal trailer, a few screenshots have been released that show off the game’s new, eerie locations – from Davy Jones’ ghost ship The Flying Dutchman to underwater caverns full of mutant fish-people and giant crabs. While we haven’t gotten a proper look at how the update will look in practice quite yet, we’re set to see some A Pirate’s Life gameplay at the Xbox Games Showcase: Extended broadcast on June 17.

Sea of Thieves Season Three, including A Pirate’s Life, will launch on July 22nd on Xbox One, Xbox Series X/S and PC. Players who have already bought a copy of the game on one of these platforms will get the update for free.

Sea of Thieves Season Seven Will Be Delayed Until Early August
Next
Viking Adventure ‘Blood Bond: Into The Shroud’ Launches On Steam
Previous
Stranger of Paradise: Final Fantasy Origin Could Make an Excellent Soulslike