With game such as Fifa, Madden, NBA, Fortnite and Call of Duty growing the video game industry beyond any other form of entertainment in the world, it is no surprise that more and more celebrities are joining the fray. Whether it be in eSports sponsorship such as Micheal Jordan and Kevin Durant funding teams, or Mason Mount, star Chelsea forward becoming an ambassador for Combat Gaming, there is a lot of celebrity crossover in the gaming industry. Turtle Beach Corporation is a leading company in the industry as it produces top tier peripherals that are known for its high quality and comfort along with innovative technology. Turtle Beach Corporation is certainly a mainstay in the casual and competitive gaming scenes. As the company continues to expand its portfolio, it has officially announced a partnership with rising NBA star, Immanuel Quickley of the New York Knicks. Quickley is a true gamer who will utilize the Elite Pro line of gaming headsets along with the Stealth 700 Gen 2 wireless headsets. 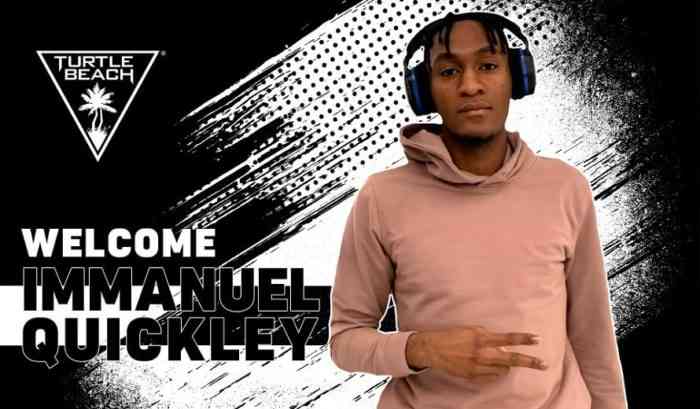 In discussing the partnership, Ryan Dell, SVP of Global Marketing at Turtle Beach had this to say, “Competing at the highest levels is in our brand DNA, so it’s a privilege for us to partner with athletes like Immanuel. Working together, we want to motivate and inspire our collective fans who enjoy good competition, both on and off the court…We’re honored to have him join the Turtle Beach family and are looking forward to working with him on powerful content as he continues building his NBA career.”

Immanuel Quickley entered the NBA in the 2020 draft and was named in the NBA All-Rookie Second Team following a stellar debut year. Most importantly, Immanuel’s talents shines off the court as he is known for honing his skills on the PlayStation 5 on NBA 2k and duly bragging about it. Quickley will continue to elevate his game using the Elite Pro 2+ Superamp Pro Performance Gaming Audio System . The partnership was done in collaboration with Roc Nation.

What do you think about crossover between video games and major sports? Let us know in the comments below or on Twitter and Facebook.

Call of Duty League Pro-Am Classic Kicks Off Next Week
Next
Switch May Compromise Overwatch 2 Visuals, If You Can Believe It
Previous
Ghost Makes A Surprise Return in Call of Duty Mobile Season 5