Late last week, developer Supermassive Games and publisher Bandai Namco gave Dark Pictures fans a big update on the new game, House of Ashes. Not only is the Pazuzu Edition available to pre-order and its contents revealed, but the game will be coming out in October. The new game is exciting and all, but maybe people who haven’t played Man of Medan or Little Hope might feel a little left behind. While the games are part of an anthology, they are entirely standalone and disconnected. You could play anyone of them and not need to play the others, but you have the chance to get all three in the Dark Pictures Anthology Triple Pack. 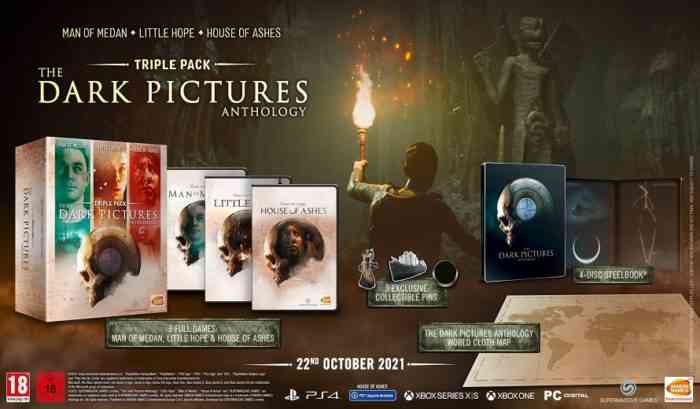 As the name suggests, the Dark Pictures Anthology Triple Pack comes with all three games; Man of Medan, Little Hope, and the upcoming House of Ashes. There may be a digital version of the Triple Pack, but Supermassive Games has shown off a boxset of physical copies. In addition to the games, it also comes with a 4-disc steelbook case (unclear what it holds if not the games), a cloth map of the world, and a set of three pins; one for each of the games.

Just like both the standard edition and Pazuzu Edition of House of Ashes, the Dark Pictures Anthology Triple Pack comes out on October 12th. The Triple Pack will be available for PC, Xbox One, Xbox Series X|S, and PS4, though the copy of House of Ashes will be upgradable to a PS5 version.

If you haven’t played any of the games yet, are you interested in the Triple Pack? Let us know in the comments below.