Pazuzu For the Win!

After last month’s reveal of the latest Dark Pictures game, we have some more information on its release, including the release date itself and a special edition of the game. House of Ashes will follow several characters at the height of the Iraq War, who are trapped in a Mesopotamian temple. They will be facing threats like monsters and demons inspired by Mesopotamian religion. The collector’s edition of House of Ashes is called the Pazuzu Edition. Pazuzu is the king of the demons of the wind the bearer of storms and draughts, so this may be telling as to what kinds of themes or events may be explored in the game. 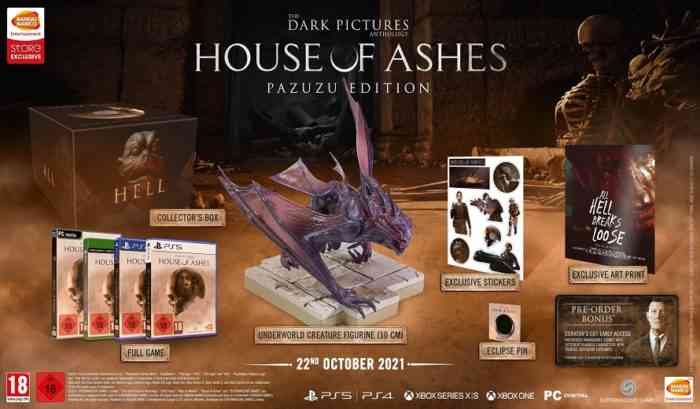 The Pazuzu Edition comes with all sorts of neat things. Along with a physical copy of the game, it comes with a set of exclusive stickers, an exclusive art print in the style of a movie poster, an Eclipse pin, and a 10 cm figurine of an underworld creature. All of this comes in a collector’s box. It also appears that pre-ordering it grants early access to the “Curator’s Cut”, which has different playable characters, different endings, and different scenes. It says the voucher code can be redeemed on the Epic Games Store, so it is unclear which customers are eligible for this bonus.

Will you get the Pazuzu Edition or the standard edition? Let us know in the comments below.

Get More Out of The Callisto Protocol Collector’s Edition

The Quarry Video Review – Required Playing for Horror Fans
Next
Back 4 Blood Trailer Shows off New Enemies and Open Beta Date
Previous
Kingdom Come: Deliverance Is Coming to Switch, For Real This Time