Unexplored 2 Is a Roguelike With Tabletop Elements

Roguelikes come in all shapes and sizes. You have top-down shooters like Enter the Gungeon, fantasy slashers like Hades, and third-person shooters like Returnal, just to name a few. The distinction between a roguelike and roguelite has a bit of a grey area, but the consensus is that the role that permadeath plays is common distinguisher. Unexplored 2: The Wayfarer’s Legacy blurs the line further than most. There is premadeath, but you can play within the same world as a previous run, except when you reach a point of no return. 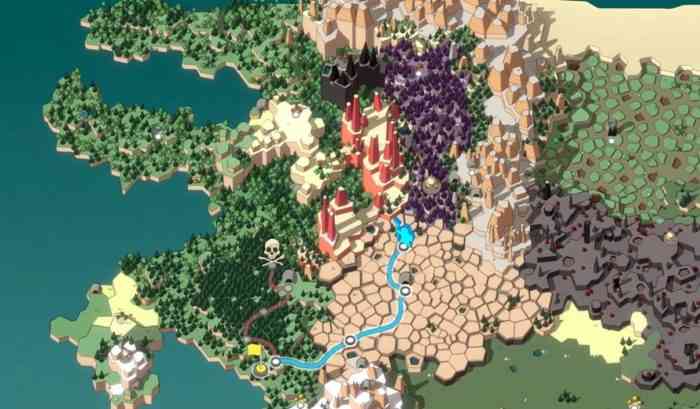 Though Unexplored 2 has many potential paths you will take, there is one goal: destroy the Staff of Yendor. You can do this by delivering it to an area call the First Valley, which is the last area of the game. Travel through different locations, dungeons, and biomes along the way to the First Valley. Along the way, you may find certain opportunities to avoid combat. You can bypass some threats with a skill check, similar to the roll of a die in a tabletop game. Skills that are useful to these checks can be collected on your journey.

There is permadeath in this game, but it works in a special way. If you die on your way to the First Valley, you can pass on your skills to another character in that same world. That character can follow the exact same path as the previous one or forge an new path by exploring other locations. However, if you die once you reach the First Valley, then that world will be lost and all the progress you made in it. Unexplored 2: The Wayfarer’s Legacy is available now on Epic Games Store’s Early Access and will be coming to Steam and Xbox in 2022.

Does Unexplored 2: The Wayfarer’s Legacy sound interesting to you? Let us know in the comments below.