Call of Duty Warzone’s most recent update took players back to the 1984 version of Verdansk while Call of Duty Black Ops: Cold War has returned players to the time of a geopolitical war concerning various Eastern European countries. As Activision, Call of Duty’s publishers, have already rewound the hands of time, it would be remiss of them to not bring back some action stars that were legends in that era.

Thankfully, with an unmissable and explosive mid-season update, players will take a trip down memory lane and reminisce with two major stars of the 1980’s action movies.

Firstly, John McClane, a New York cop who arrives at a holiday party turned hostage situation and the protagonist of the Die Hard series will be playable! Secondly, Rambo, the star of the movie series who effortlessly tears down enemies in various fights, and the movie that has since inspired countless action flicks since then will also be playable! 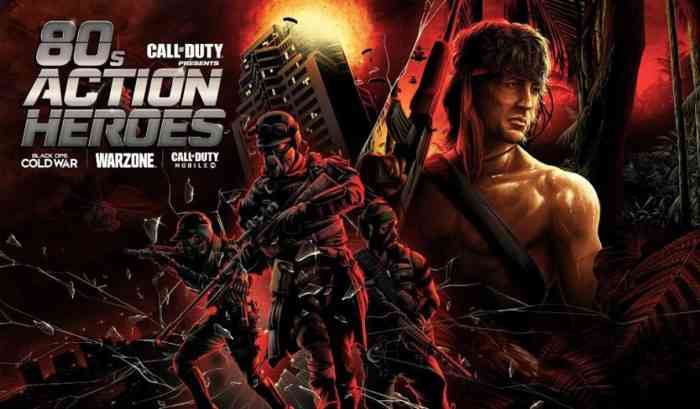 Besides the introduction of McClane and Rambo as playable characters, the mid-season update will bring introduce a host of other content for Warzone, Black Ops: Cold War, and Call of Duty Mobile. For Warzone, there will be three new points of interest including Nakatomi Plaza, Survival Camps, and a CIA Outpost as well as the introduction of a Crossbow killstreak and the Ballistic Knife. Black Ops: Cold War also received a substantial amount of content that is sure to please fans including Standoff and Duga as new multiplayer maps, new game modes and medals such as Die Hardpoint and Rambo Gun Game while the Zombies game mode received new quests, time modes and weapon buffs.

In Call of Duty Mobile, there is a new multiplayer time-limited game mode and the Die Hard and Rambo Store Bundles.

Are you excited for the introduction of Rambo and McClane of Die Hard? Let us know in the comments below or on Twitter and Facebook.

Call of Duty: Vanguard Lets Players End Matches With a V2 Rocket
Next
Summer Game Fest 2021 Kicks Off in June With Over Thirty Partners
Previous
Teeing Off With ‘A Little Golf Journey’