Infamous Rabbit is cooking up a darker version of Earthbound, Oddventure, due sometime in late 2022. They’ve got a publisher -Pineapple Works- and a Kickstarter coming next month. This is awesome news, dampened only by the many Earthbound homages of the last decade that failed to stick the landing. 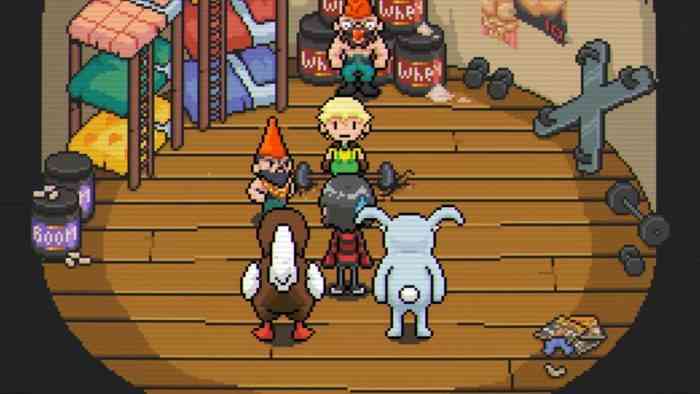 Not to be a negative Nancy! It’s totally possible that this particular Earthbound sendup will be the one to really resonate with people. The game is being gassed up as a Nietzschean take on the classic game, one where every single decision matters. They also boast that nobody has to die, but they can – often in pretty gruesome ways. Cool? Also frog milk is listed as a form of currency, which scans as decidedly neutral.

If you’ve been starving for a tribute to the Mother franchise that both faithfully emulates the aesthetic and violently inverts the central conceit of the games, maybe this is for you! Personally I’ve grown weary of these repeated attempts to capture the ephemeral spirit of that series, but I’m always happy to be proven wrong. If nothing else, Oddventure looks very much like and Earthbound homage should look. Whether it successfully encapsulates that certain something is a separate matter. Of course, you can check out the Steam demo to see for yourself. You can also scope out the Sizzle Reel embedded below. Oddventure is set for release (barring the outcome of the Kickstarter) on PC and Switch in Q3 of 2022.