Who Would Win: the US Military or One Big Hungry Girl?

Since Maneater slipped into the gaming ocean, we’ve learned one surprising fact: the whole world is craving more shaRkPG action. Fortunately, Tripwire Interactive has heard our shark-related prayers and they just announced something amazing. Maneater: Truth Quest will return to Port Clovis and pick up where the original game left off, this time with more conspiracy theories, more Apex Predators, and a lot more humans to fight. Investigative journalist Trip Westhaven, former narrator of the in-universe TV Show Maneater, has stumbled onto something big, or so he claims. He’s discovered the real reason the sealife is mutating in such strange and terrifying ways. The story chronicled in the original Maneater was just a government cover up, but his ViewTube channel Truth Quest will dive deep and uncover the real facts. At the very least, it promises to be incredibly entertaining.

Sean McBride, Creative Director at Tripwire Interactive, stated that: “We’re aiming to give players more of what they loved from the original Maneater, with the ability to grow bigger, explore an entirely new region off the coast of Port Clovis, and evolve further tools of destruction. Inspired by Scaly Pete’s father’s tales of ‘Gub’ment Experiments’, we pick up where we left off and join Trip Westhaven and the shark’s journey down the rabbit hole of conspiracy and military cover ups as you eat, explore and evolve through these uncharted waters.”

Yes, you read that correctly: the US military is now after one bull shark–though to be honest, we’re not sure she really counts as a bull shark anymore. After all the mutagens she’s gobbled down, she’s basically become the shark equivalent of a super soldier. It’s great. 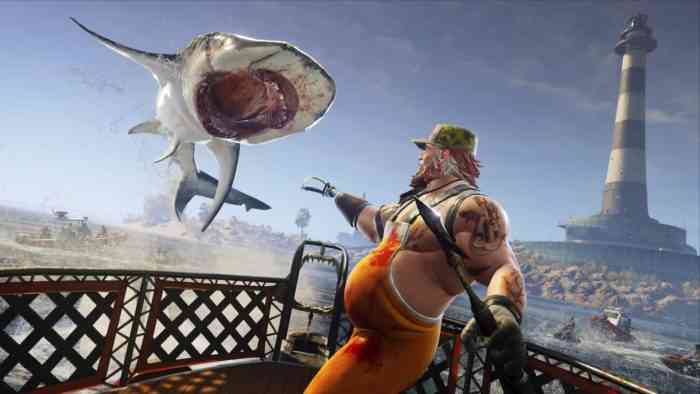