No Pain, No Game

In a couple of months, Mass Effect: Legendary Edition will be coming out and bringing the original trilogy to modern consoles. Hardcore fans may already have all the games, but might be wanting to pick up the remastered collection anyway. If you just want to get the games digitally, that’s fine. It’s a great value, but if you want a physical copy, you can pre-order it at Best Buy to get a free steelbook. If you have a fat stack of cash burning a hole in your pocket, you can pick up the Mass Effect Legendary Cache. 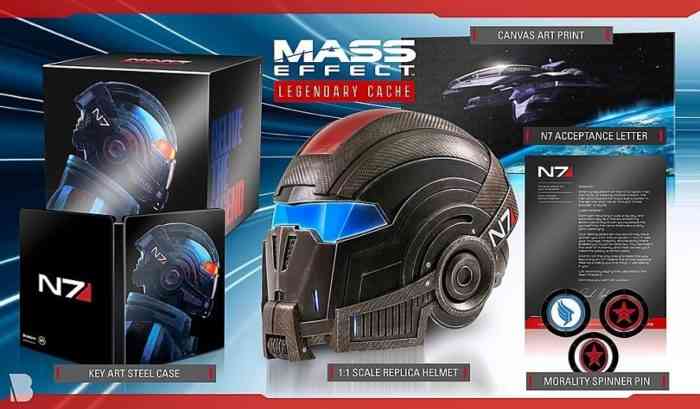 Buyer beware: the Mass Effect Legendary Cache does NOT, I repeat, does NOT come with the game. It is basically a collector’s item, not a collector’s edition of the game. That being said, it is still pretty sweet. The big draw is that it comes with a “wearable” N7 Helmet. I say “wearable” because human heads are pretty different, so just because someone can wear it, does not mean everyone can. It also comes with an N7 Acceptance Letter on 8.5″x11″ N7 letterhead, a Renegade/Paragon Pin that can spin and change logos, two 16″x8″ Canvas art prints, and an exclusive steelbook case.

The steelbook in the Legendary Cache is not the same as the Best Buy one, so if you wanted, you could get both and still have just one copy of the game. The Legendary Cache is currently only in stock on BioWare’s store website for $149.99. Mass Effect: Legendary Edition will be out on May 14th for PC, Xbox One, Xbox Series X, PS4, and PS5.

Does this Legendary Cache interest you? Let us know in the comments below.