Project Athia is an exciting new Square Enix IP, but it’s also one we know very little about. Until a couple of hours ago, we didn’t even know the game’s name. Project Athia was a working title, meaning that it was always tentative, and subject to change. In fact, we were calling it Project Athia for so long we forgot that the final title would likely have been simply Athia – the name of the game’s world. At March’s Square Enix Presents we finally got another look at the game, as well as a title: Say hello to Forspoken.

The trailer doesn’t show us all that much, but does give us some footage of protagonist Frey in action, using a variety of magical skills against her enemies. Luckily, director Takeshi Aramaki revealed a little more in the PlayStation Blog:

“Forspoken is an action RPG where you will take on the role of Frey Holland, an ordinary young woman who must harness her magical abilities to survive in a fantastical and dangerous land called Athia. As Frey, you will embark on a thrilling, other-worldly adventure and face treacherous trials to unravel the mystery behind the unknown land of Athia and awaken something much more from within.

As you’ll see in the new game clip, Frey is able to traverse the world with incredible speed and fluidity. I can’t wait for players to experience firsthand just how satisfying it feels to move through Athia, scaling cliffs, and leaping across ravines in the future.”

Not much we haven’t seen before, but it’s worth noting that he does specify the future. Given that the trailer does show Ella Balinska’s Frey seemingly having her first encounter with a dragon in a ruined building, could we be seeing Forspoken following in Final Fantasy X’s footsteps with a time-traveling twist? And let’s not ignore the fact that Athia shares a lot with the word Earth – maybe some future mutation of the name of our planet? It’s also worth noting that the word Forspoken is the past participle of Forspeak, which can mean either bewitching or jinxing something. Could such a jinx be involved, given the possibly futuristic setting? We don’t know yet, but Balinska promises more details are coming, and this one will be worth the wait. 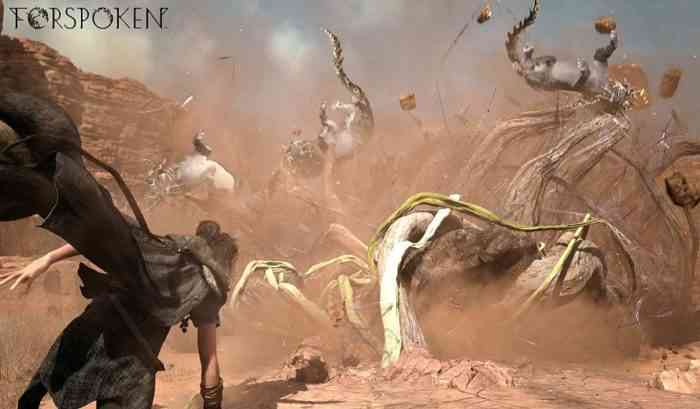 PlayStation Showcase 2021: 5 Things I Loved and 3 Things I Hated
Next
Mass Effect Legendary Cache for the Most Elite Paragon or Renegade
Previous
Tomb Raider: Definitive Survival Trilogy is Now Available