A week from now, the new Hawkeye DLC Future Imperfect will launch along with the Xbox Series X and PS5 upgrades. There will be a new character, Clint Barton; the original Hawkeye and an accompanying set of story missions, a new Wasteland biome, and Maestro; a villainous version of the Hulk. Along with the graphical and performance improvements of the current gen upgrades, there will also be a couple of highly requested features being implemented, including story mission replay and customizable HARM Rooms. 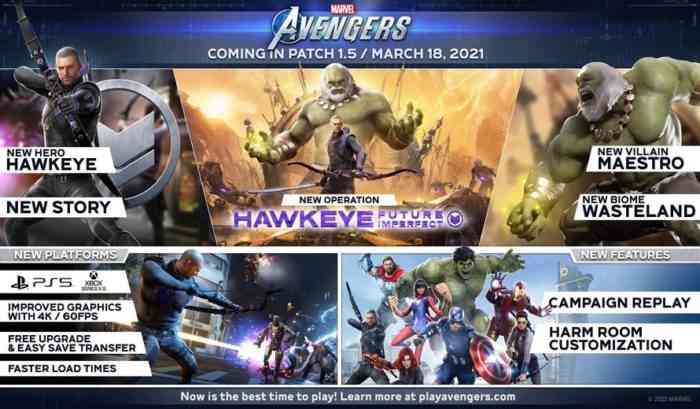 The biggest criticism of Marvel’s Avengers is the repetition. Missions are generally the same. There are some varying objectives, but the enemies are mostly the same, and you have to do the same things over and over to max out your characters. As a big fan of the game, even your ol’ pal Zane can feel that. That is why there is a bit of mixed messaging when we hear that fans want to be able to replay the story missions. “Give us more variety! Also, let us replay the exact missions from the story!” If you like the moments between characters and the cutscenes, then playing the story again will be a welcome feature. You can use any of the outfits and all the skills you have picked up since the game launched, but is there any other benefit? Unlocking new stuff? It does not seem like it.

Another repetitive mission type are the HARM Rooms; wave-based combat challenges. There are about half a dozen preset HARM challenges, but this patch will allow players to customize their own HARM Rooms. If there are certain enemies you hate fighting, you can omit them or challenge yourself by filling the room with them. I can also see this helping with daily challenges of defeating certain enemy types. Marvel’s Avengers is out now for PC, Stadia, Xbox One, and PS4, and will be out on PS5 and Xbox Series X on March 18th.

Will you be taking advantage of the new features? Let us know in the comments below.