COG Considers: How to Make Vampires Sympathetic and Terrifying

Today on COG Considers, let’s talk about vampires. Generally speaking, there are two kinds of vampires encountered in video games: the blood-crazed enemy you can kill without hesitation, and the sympathetic, troubled teammate or NPC who’s trying not to be a monster (with varying results). Some games feature both types, but Loop Hero combines them into a single vampire archetype, and I think that’s pretty awesome. Add in some really creative worldbuilding and ludonarrative storytelling and you have some of my favorite vampires in gaming, period. 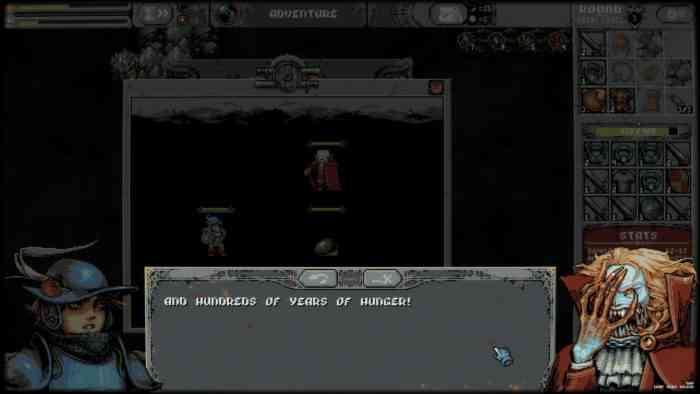 When you first encounter a vampire in Loop Hero, the hero greets him cheerfully, because in the world he knows, humans and vampires have formed a symbiotic bond. Humans willingly seek out vampires and trade blood for protection. Unfortunately, all of this was before the world was shattered and plunged into a timeless void, so what was once a benign protector of humanity has long since gone mad with hunger. The cutscene ends with the unable to talk the starving vampire down and the two are forced to fight. The whole conversation is only about a minute or so of dialogue and gorgeous pixel art, but it lingered in the back of my head during my whole playthrough and made fighting vampires a sad and stressful experience. They’re just one of many random enemy types who can be placed in dungeons and will kill you if they get the chance, and yet they are also people. Tragic, terrifying, and clearly thinking, feeling, people… but also being driven completely, horrifyingly mad by starvation. This little roguelite has made me feel more for the plight of vampires than the entire World of Darkness, and they’re not even playable characters!

As if that weren’t enough, Loop Hero also went the extra step and worked the nature of its vampires into the gameplay. If you place a Vampire Mansion card right in front of a healing Village card, the Village will be immediately transformed into a Ransacked Village populated by deadly ghoul and vampire enemies. However, if you can endure three loops around the circular dungeon, the Ransacked Village will instead become a Count’s Lands card, as the vampire’s thirst has been quenched and his sanity restored. The Count’s Lands heals much more health than a typical village and is one of the safest cards in the whole game, providing a valuable respite from the dungeons’ dangers. The first time I witnessed the transformation, I felt like crying. The art of ludonarrative storytelling is conveying a game’s themes through its mechanics as well as its writing, and Loop Hero did a fantastic job of making the tragedy and redemption of its vampires part of the gameplay.

I hope more developers take cues from the way Loop Hero handles its vampires. The idea of vampires and humans working out a symbiotic relationship is a fun one.


‘Age of Darkness: Final Stand’ is a Mega-Challenging Real Time Strategy with a Grim Twist

Get Ready For A New Breed Of MMO With Bitcraft
Next
Enji Night’s Beautiful Cosplay Makes Our Day
Previous
Fugitive in England Breaks Cover to Buy Call of Duty, Arrested