Does Whatever a Spider-Man Can

There are a lot of really cool things about this Spider-Man: Miles Morales statue being made by Hot Toys. For one, just by looking at the images, you would think that there are a bunch of different figures in different poses. Wrong. The figure just has a ton of points to bend and shape Miles to how you want him. Another awesome thing about it is the costume. It is the 2020 costume from the game that unlocks when you complete all the hologram challenges. It is really amazing, but it also has a high end price tag to match its high end quality. 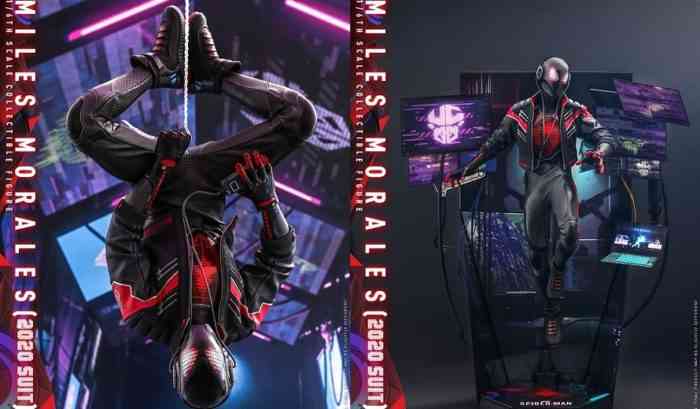 The costume itself is a perfect blend between function and fashion for a Spider-Man. It is a breathable bodysuit with a cyber-display of his emblem and a jacket to suit Miles’s style. The helmet is also very futuristic in a Daft Punk way. It also has Miles’ signature sneakers. The statue comes with a ton of interchangeable pieces. There are five different pairs of hands; one pair of fists, web-shooting hands, web-swinging hands, open hands, and relaxed hands, all of which can be mixed and matched. There are also different eyepieces that can be changed to create different expressions. The helmet is also lit by LEDs.

The statue also comes with a music-player accessory, which can magnetically stick to almost any part of the body. The headphones do not come off, but will reach wherever the music-player sticks. It comes with a stand that supports the statue with a bunch of monitors to match the cyber motifs. The stand has the game logo on it and a detachable Peter Parker hologram figure, as well. The statue will run you $290, which you can pay off in installments. You can pre-order the statue now and it is expected to ship between April and June of 2022. Spider-Man: Miles Morales is available on PS4 and PS5.

Would you get this statue? Let us know in the comments below.