When Can We Expect a Hades Crossover?

Starting today, Ubisoft’s adaptation of Greek mythology meets… a second, slightly more anime interpretation of Greek mythology. Only slightly, though, because Immortals: Fenyx Rising is pretty heavy on the bright colors, wild hair, and crazy awesome style itself. Blood of Zeus is a Netflix show which follows the struggle of one of Zeus’ many, many illegitimate kids, who must save both earth and the heavens… assuming he can survive a pissed-off goddess. Sounds like a good fit for Immortals: Fenyx Rising‘s world. We knew post-launch content would bring new pantheons, but somehow we weren’t expecting multiple versions of the same ones. Not that we’re complaining. There’s room for infinite variations on these age-old Hellenistic tales, so we’re happy to embrace everything the new crossover event has to offer players of Immortals: Fenyx Rising.

The press release announces that: ‘From 21st January to 28th January, in a Blood of Zeus–themed quest called “A tribute to family”, players will take on two evil creatures of another world: Chimera and Cerberus. Upon completion of the quest, players will earn the Eagle pendant and all-new character customisation options tied to “Blood of Zeus.”’

As if that weren’t enough, players will also get access to a new weapon pack containing Blood of Zeus-themed skins for Fenyx’s sword, axe, and bow. And, if you’re a huge BoZ fan, you can get the character pack, too, which includes armor, helmet, wings, mount, and even a phoenix companion. Both these packs will be available for purchase at any time, even after the crossover event concludes.

I think we can safely say this crossover is going to awesome while it lasts. Now all we need is for Supergiant’s roguelike Hades to join the brawl and start generating legions of Zagreus/Fenyx ship art–or better yet, cosplay. Hold on, that actually sounds amazing. It started out as a joke but now it’s our OTP. Please, Ubisoft, make this happen! 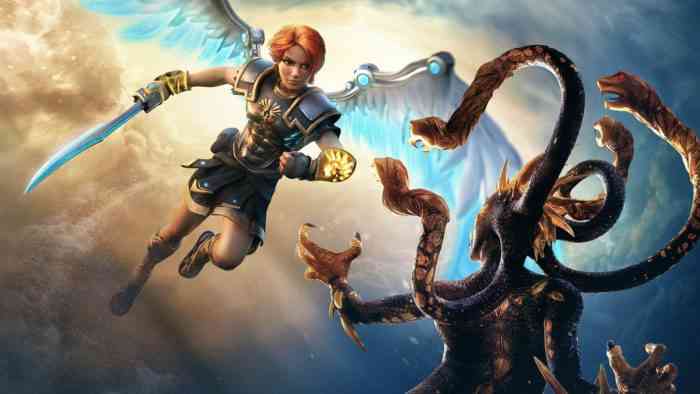 What other Greek mythology-inspired story would you like to see in Immortals: Fenyx Rising? Let us know down in the comments, or hit us up on Twitter or Facebook.