The new Mortal Kombat movie supposedly wrapped quite a while ago. Since then, its release date has jumped around a lot, being pushed back and forth. Today was actually supposed to be its debut at one point. Unfortunately, COVID-19 happened and everything went off the rails. Our most recent update on the movie was last month when we were given the new release date of April 15th. Today, Entertainment Weekly released a handful of brand spanking new images from the movie for us to feast our Earthrealm eyes on. 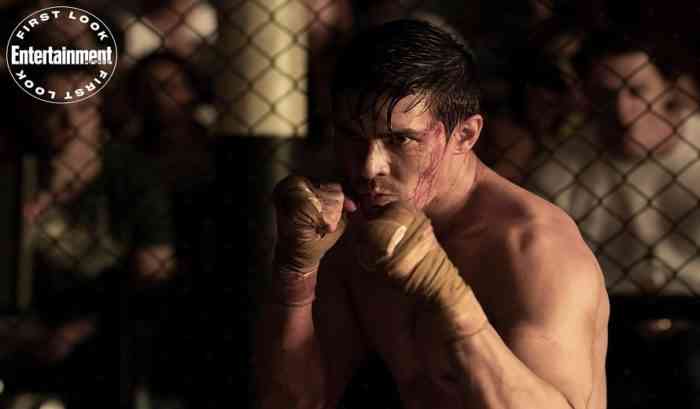 In these images, we see several iconic Mortal Kombat characters brought to life by the new cast. One of the first images is Joe Taslim and Hiroyuki Sanada playing Sub-Zero and Scorpion respectively, with Sub-Zero plunging a kunai into Scorpion. Another image (above) shows Lewis Tan as Cole Young, a “washed up MMA fighter” taking part in a match. We also see images of Sub-Zero conjuring an ice weapon, Mehcad Brooks as Jax (looking like Steve Harvey), fighting back against a large foe, and Ludi Lin and Tadanobu Asano as Lui Kang and Raiden teaming up. There is also a scene where Jessica McNamee as Sonya Blade fights Josh Lawson as Kano, much like they did in the 1995 Mortal Kombat movie.

The EW article also gives us a bit of an insight to the plot, where all the Earthrealm fighters bear a strange birthmark, which supposedly ties their fate to the story of the movie. Mortal Kombat is expected to hit HBO Max and theaters on April 16th.

Are you excited to see the Mortal Kombat movie reboot? Let us know in the comments below.