Dying Light 2 has been in development limbo for the last few years. Between people leaving Techland and ongoing support to the first Dying Light, it’s been a long, grueling road to release. It will hopefully come out this year, but we still don’t even know for sure. Here’s something that might tell us just how close it is though. An image of the Dying Light 2 Collector’s Edition was leaked on Reddit yesterday. Of course, if shows us some really great physical items for players that are willing to spend the extra cash, but to the trained eye, it also offers another mysterious bonus. 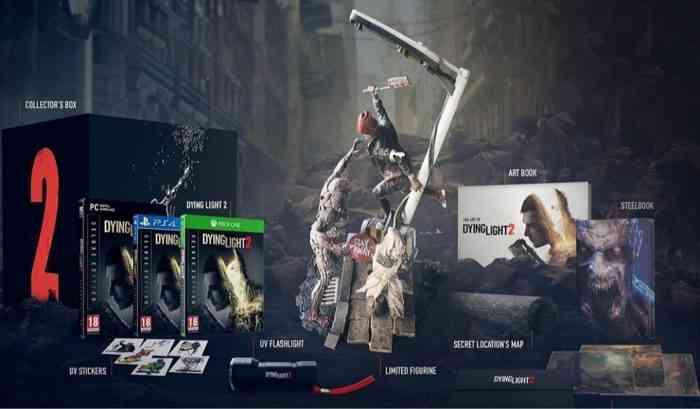 Let’s start with what we see. Obviously, there is the statue front and center of our character striking a zombie under a street lamp. Hopefully, that street lamp lights up. It also comes with a physical artbook, a steelbook case, and a map of secret locations. There are also some UV stickers and a UV flashlight, which might reveal some cool images. In the bottom-righthand part of the image, there appears to be a folder of concept art or lithographs to look over as well. This all comes in a collector’s box with a physical copy of the game.

Speaking of the game, it shows that it comes with the Deluxe Edition of Dying Light 2. Now, we have not yet had any news on what the Deluxe Edition holds, but we are guessing that there is some digital content like maybe weapon skins or a survival pack or maybe a season pass. We will have to wait for something more official before that is revealed. Dying Light 2 will hopefully be coming out soon for PC, Xbox One, and PS4.

What do you think will be in the Deluxe Edition? Let us know in the comments below.