Call of Duty: Mobile finally released in China and with great success at that. The mobile version of the hit first-person shooter franchise was developed by Activision in partnership with Tencent’s Timi Studios. According to an initial study done by Sensor Tower, the game has amassed more than $14 million in revenue in its first week in China.

The Chinese release has been long awaited as the game originally released on October 1, 2019–over a year before the Chinese release on December 25, 2020. The game released on the Chinese app store on Christmas day and was the fourth highest grossing game over the next week. While the game grossed over $14 million dollars, it was still beat by Fantasy Westward Journey from NetEase earning $23 million, PUBG Mobile (Game for Peace as it is known in China) from Tencent Games earning $24 million, and Honor of Kings also from Tencent Games earning a whopping $64 million dollars. 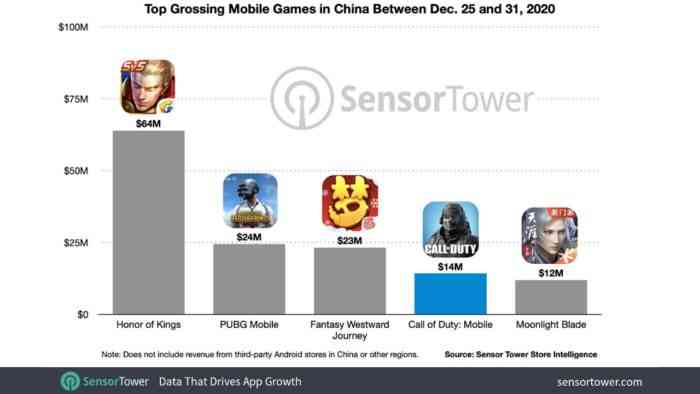 According to Sensor Tower’s analysis, as of the end of 2020, on December 31st Call of Duty: Mobile has earned close to $644 million dollars in revenue worldwide. Approximately $287 million of that is from the United States alone as it is currently the No. 1 country for player spending. Japan and Germany follow behind as the No. 2 and No. 3 countries for player spending respectively.

Call of Duty: Mobile’s success in the Chinese market is worth noting as a great accomplishment for Activision. However, a great portion of the success has to be attributed to their Chinese partner, Tencent, as they have a massive influence on the market there, which can clearly be seen above as they have some kind of connection to four of the five highest grossing titles in the country last week. They also have ties to Supercell which also saw a Chinese release in 2020 earlier this year in June, and was even more successful than Call of Duty: Mobile, earning more than $20 million in its first week.

Call of Duty: Modern Warfare 2 Premieres World Reveal Trailer
Next
T-Pain Spells Out What it Means to Be a Big Streamer
Previous
The Wonderful 101 Remastered Adds New Characters Through Cheat Codes