The Wonderful 101 Remastered released earlier this summer following a very successful Kickstarter campaign. Despite the game launching months ago, developer Platinum Games is still supporting the game with new content–now, in the form of cheat codes. 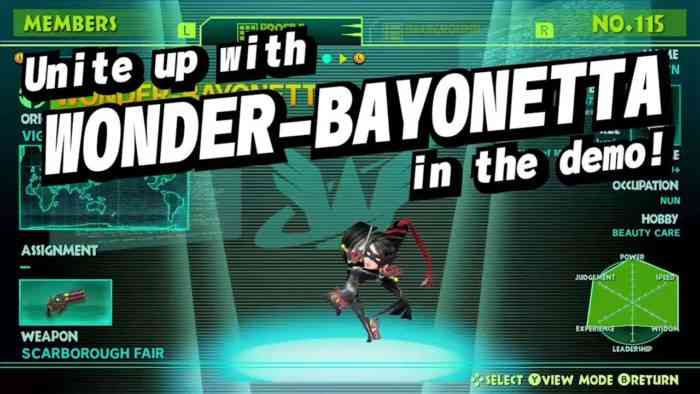 Hidden in the in-game menus is the “Wonderful Code” option, allowing players to input cheat codes. There are seven codes available so far, all of which have been revealed on Platinum Game’s Twitter page with the first code offering up a well known character from the company, Bayonetta! Or, more specifically Wonder-Bayonetta!

To celebrate the release of the Wonder-Size Cadet Demo, we're sharing two Wonderful Codes!
Use "UMBRANGIFT" to unlock Wonder-Bayonetta, and "ANGELSLAYERS" to Wonder-Jeanne and Wonder-Rodin!
More codes to come in the future, so stay tuned! #TW101 pic.twitter.com/559pBuy4O0

You may have noticed the tweet with the Wonder-Bayonetta code also included a code for Wonder-Jeanne and Wonder-Rodin, as well as the hint that more codes would be coming in the future.

To date, Platinum Games has released 5 cheat codes so far, all of which offer new characters. Here is a complete list of the codes released so far with the most recent being announced on Platinum Games’ Twitter page just a few days ago on January 1st.

On average, Platinum Games is releasing one code per week, and have stated that they will be releasing 7 codes in total so expect the next two very soon.

Bayonetta 3 Has a “Naive Angel Mode” To Cover Up Sexy Stuff
Next
Call of Duty: Mobile Earns More Than $14 Million in China
Previous
Netflix Is Getting Removed From the Wii U and 3DS