Unlock Ghost of Tsushima Skins Based on PlayStation Characters

If the sub-header is any indication, Sucker Punch Productions is holding an in-game event where players can unlock some pretty cool Ghost of Tsushima skins. These skins are inspired by some of the most iconic PlayStation exclusives such as God of War, Horizon: Zero Dawn, Shadow of the Colossus, and Bloodborne. The process of getting these skins is pretty simple, too. It might be Sucker Punch’s way of saying thank you to fans who gave them such a great night at the Game Awards, as well as a shoutout to the other PlayStation games. 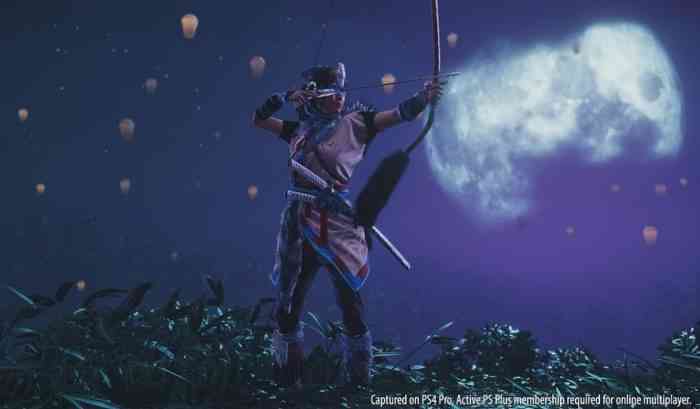 These skins are for Legends multiplayer mode, each for a different class. The Samurai class’ armor is painted with Kratos’ colors and has chains wrapped around its wrists. The Hunter’s skin looks like it’s lifted right out of Horizon: Zero Dawn with their clothes and colors just like Aloy’s. The Assassin’s new skin is inspired by Shadow of the Colossus. It has a mask that looks to be designed with both stone and fur, kind of like the Colossi, as well as familiar designs on their robes. The Ronin’s clothes are kind of tattered like the Hunter’s in Bloodborne. They also are lined with feathers, like a few of the game’s enemies.

From now until January 15, 2021, unlock these #GhostOfTsushima: Legends outfits inspired by iconic PlayStation characters from God of War, Horizon Zero Dawn, Shadow of the Colossus and Bloodborne! Complete any Story or Survival mission with each class to unlock all four outfits! pic.twitter.com/xVhQGlAeMc

So, how do you actually get these skins? They aren’t exactly a log-in prize. All you have to do is complete a story or survival mission in multiplayer as each of the classes. For example, beating a mission as the Ronin will unlock the Bloodborne skin. Players have from now until January 15th to permanently unlock all of the skins. Ghost of Tsushima is available exclusively on PS4.

Will you be unlocking these skins? Let us know in the comments below.

Horizon Zero Dawn: Complete Edition is Free to Download From Today
Next
Myth of Empires is the War Sandbox Game of Your Dreams
Previous
Microsoft Offering Refunds for Cyberpunk 2077