Extra content. That’s how they get you. Whether its a season pass, bonus resources, an exclusive armor set, or just some dope cosmetics, there is often some extra content a player can get by pre-ordering or getting a Deluxe Edition of a game. Your ol’ pal Zane has pre-ordered and bought special editions of games more times than he can count for cool stuff. It is a really common practice, but sometimes it feels like you almost need to pay more in order to really compete. Some fans feel this way about Demon’s Souls Deluxe Edition. 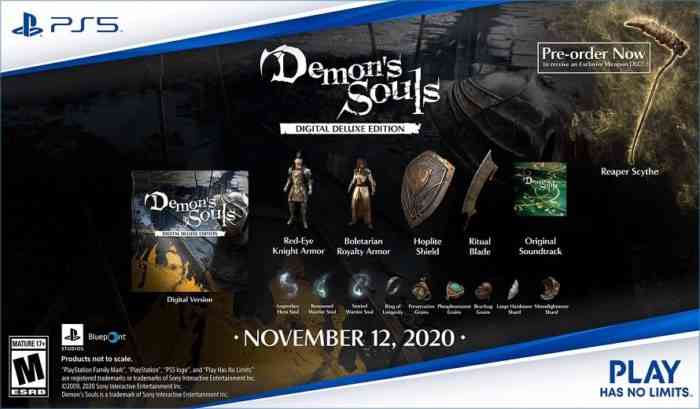 What’s in Demon’s Souls Deluxe Edition though? Well, you get the game and the original soundtrack, but you also get a bunch of in-game content. You have the Red-Eye Knight Armor, Boletarian Royalty Armor, Ritual Blade, Hoplite Shield, Ring of Longevity, Preservation Grains, Phosphorescent Grains, Bearbug Grains, Large Hardstone Shard, Moonlightstone Shard, Legendary Hero Soul, Renowned Warrior Soul, and Storied Warrior Soul. If you pre-order the game, you also get an exclusive Reaper Scythe, which cannot be found in the base game. That also goes for some of the Deluxe content.

For a famously difficult game in a famously difficult series, these items can really turn the tide of battle for players, which kind of goes against what fans are expecting from it. Demon’s Souls Remake will be coming out on November 12th for PS5, so you got a little while to decide if you really want that bonus content.

What do you think about bonus content of deluxe editions of games? Let us know in the comments below.


What Comes With The Quarry Deluxe Edition?

This Demon’s Souls Backpack is a Total Steal at $148