After weeks of rumors, Ubisoft officially announced the Prince of Persia Remake last week at Ubisoft Forward. Of course, when concerning a remake, developers have to respect and pay homage to the source material, in this case, the 2003 Prince of Persia game. That game however is not the first game in the franchise. Prince of Persia was a 1989 2D side-scroller. According to Ubisoft, that game will also be included in the Remake and accessible at any time. Talk about turning back time, huh? Not only that, but costumers who pre-order the Remake will get some cool stuff inspired by the 2003 game. 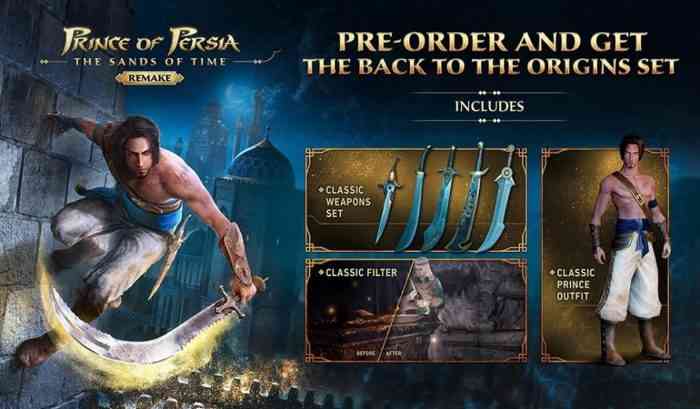 On Ubisoft’s site, you can pre-order The Sands of Time Remake for PC on the Epic Games Store or Ubisoft Store, on PS4, or on Xbox One, with physical copy options for PS4 and Xbox One. Pre-ordering of any of these platforms will give players access to the Back to the Origins Set. This contains the classic outfit and weapon skins from the 2003 Prince of Persia game. It also allows players to switch between classic and modern filters on the graphics.

Something curious about the pre-ordering is that there is a drop-down menu under Editions, but only a standard edition is available. Maybe that is just a default menu on the Ubisoft site or maybe they are planning to add a deluxe or collector’s edition. That would be sweet. The standard edition of Price of Persia: The Sands of Time Remake can be pre-ordered now and will be available on January 21st, 2021 for PC, PS4, and Xbox One.

Will you pre-order the Prince of Persia Remake for these classic skins? Let us know in the comments below.