On the Shoulders of Titans

When Immortals: Fenyx Rising got some fancy new gameplay to go alongside the new name (the game was previously known as Gods and Monsters) a lot of people were quick to point out that, despite its trappings, the game looked a lot like The Legend of Zelda: Breath of the Wild – one of the best regarded games of the past few years. 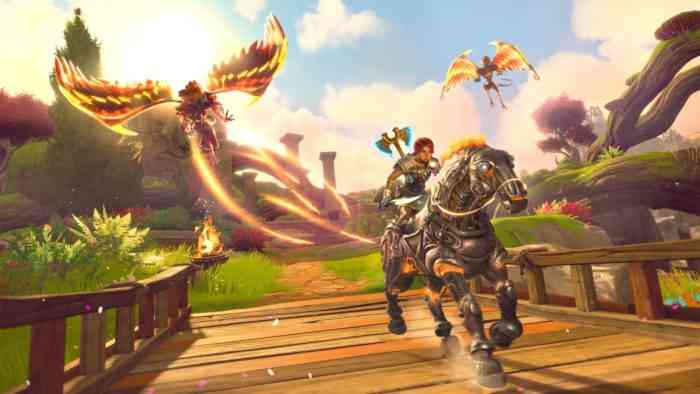 Some of the similarities, of course, are superficial. Like Breath of the Wild, Immortals: Fenyx Rising is an open-world action adventure game. However, there are some similarities that are more striking. The protagonist, Fenyx, can manifest weapons which have a similar look to the powers manifested by the Sheikah Slate. There’s an area in the centre of the world which is surrounded by a barrier.

“I think what makes Immortals Fenyx Rising quite unique is the setting, so exploring the Greek mythology, and also the tone we are we are using to do that, so having something light-hearted and a lot of humour within the way we explore the Greek mythology.

And also that balance between exploration, puzzles and especially the combat is fast-paced, acrobatic, fantastical, and you’re going to fight a lot of different creatures, sometimes pretty huge like a Cyclops and Minotaurs. I think all of that mixed together brings something pretty unique to Immortals Fenyx Rising.”

The Greek mythology is particularly interesting, and a hint that we’re getting something truly unique. This isn’t the first time a game has had a lot of similarities with the Zelda series, and bringing some mythological influences can make a huge difference. Immortals: Fenyx Rising is doing to Greek Mythology what Okami did to Japanese mythology.

There’s also the fact that Immortals is more distinctly humorous. Unlike Link, Fenyx is both fully customizable and voiced, dropping jokes or pop-culture references while upgrading her stats.

Galloudec also stated that, while Breath of the Wild was a distinct influence, it was one of many, such as Jak and Daxter or Banjo-Kazooie. The similarities are there, but it’s not the whole story.

Are you going to get Immortals: Fenyx Rising? Hit us up to let us know.


Breath of the Wild 2 Still Poised for 2022 Launch

Hyrule Warriors: Age of Calamity Has More Than 4 Million Shipped

Grab Some Hot Titles Like Assassin’s Creed Valhalla and Watch Dogs: Legion at 50% Off Right Now

It May Be Hard To Believe but Biomutant Is on Sale Right Now
Next
Pre-Order for the Crash Bandicoot 4 Demo This Month
Previous
Watch Dogs: Legion Gets a Release Date