With International Talk Like A Pirate Day right around the corner, the developers at Rare Ltd. are celebrating with another round of Twitch Drops for Sea of Thieves – this time featuring cosmetics inspired by Ori and the Will of the Wisps – both of which are available on Xbox Game Pass.

For those that might be unfamiliar with what exactly Twitch Drops are: they offer gamers the opportunity to earn exclusive and limited edition in-game items for various video games simply by watching their favourite streamers and content creators on Twitch. Each day during the event, gamers will need to watch any of the Partnered Sea of Thieves streamers for 30 minutes in order to qualify for the featured item. Daily Twitch Drops will be available for 24 hours (changing at 10AM BST) and partners will be streaming on their own schedules. Sea of Thieves Partners include: Captain Falcore, Hitbotc, PhuzzyBond, and BBXH to name a few.

Gamers interested in earning Twitch Drops will also need to have a Twitch account and ensure that it is linked to their Sea of Thieves profile: https://www.seaofthieves.com/twitch-drops#faq-what-are-twitch-drops 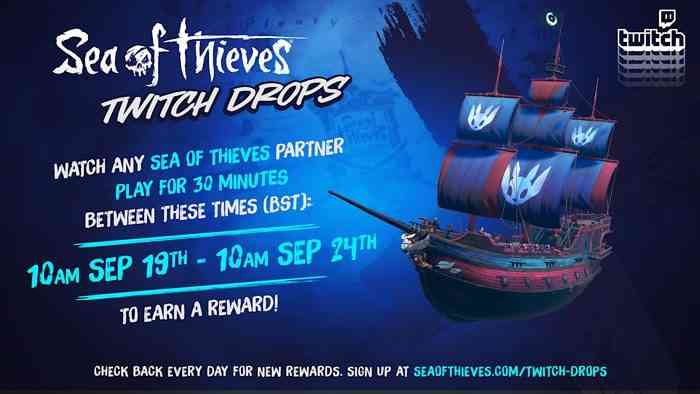 After viewing a qualifying stream for 30 minutes, a notification will appear on Twitch to confirm that the item has been awarded; items will usually be available to use immediately but can take up to 72 hours in some cases. Should the item(s) not be recurved, players are encouraged to contact Sea of Thieves Support and submit a support ticket.

The Ancestral Ship Set was originally available for a limited time (May 2020) to all Xbox Game Pass Ultimate subscribers via the Perks program.