Of All The Channels To Try This With…

Notch has deleted his Twitter account. While this usually happens when a celebrity does something awful, this is a slightly different case. The controversial Minecraft creator is merely fulfilling a bizarre promise he made with Game Maker’s Toolkit, a YouTube channel with a decent following. 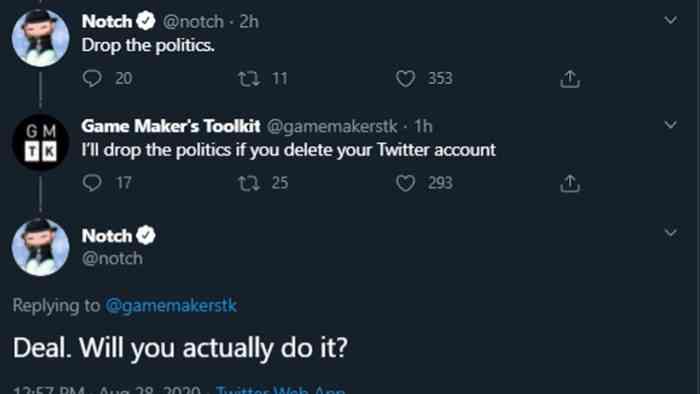 Long story short, Notch asked said channel to ‘drop the politics.’ GMTK agreed to do so if Notch deleted his Twitter account, which he… did? The confusing part about this is that the channel isn’t generally a political one. Maybe I’m just the wrong person to ask, but it really seems like a technical behind-the-scenes style YouTube channel?

One of the screenshots does reveal Game Maker’s Toolkit expressing a negative opinion on some political candidate (whose name is blocked out in the screenshot). The actual post is a reflection on the negative consequences of including skippable ads on YouTube videos. Notch choosing to zero in on this footnote-sized detail says a lot more about his own fixation on politics, to be honest. This exchange also demonstrates that Game Maker’s Toolkit will have a much easier time dropping the politics from their feed. The most important thing is that Notch isn’t currently on Twitter.