It’s been a promising opening week for Ghosts of Tsushima. PlayStation 4 players had purchased over 2.4 million copies of the game in just the first 3 days of release. A week later, PlayStation has compiled and released a bunch of statistics that the players have collectively achieved in the game. You may be wondering how many players have beaten the game on the hardest difficulty, what the fastest completion time is, or if anybody has done a no-hit run, but those are the boring stats. The Ghost of Tsushima stats we really care about are down below. 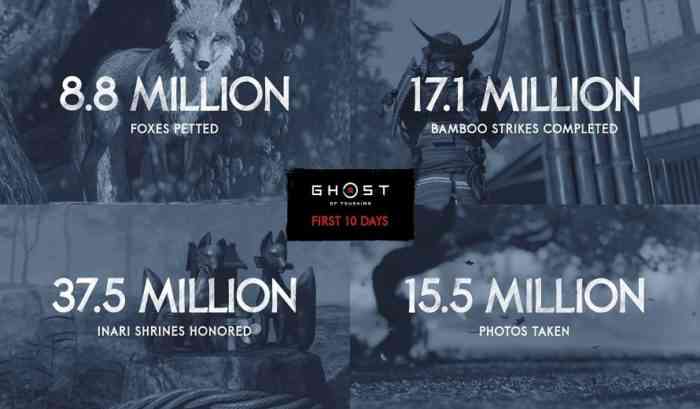 The stats that PlayStation is highlighting are in-game activities. They are not necessarily required beat the game, but they include side-missions and collectibles. Players have collectively completed 156.4 million Standoffs, 57.5 Duels, made 139.4 enemies collapse in fear, spent 810.3 years on Horseback, visited 16.2 million Onsen, written 14.2 million Haikus, played 28.1 million Flute Songs, pet 8.8 million Foxes, made 17.1 million Bamboo Strikes, honored 37.5 million Inari Shrines, and taken 15.5 million photos in the Photo Mode. Doing all this stuff, how did people manage to finish the game?

You’ve all been busy! Stats from the first 10 days of #GhostofTsushima

If there is anything we can take away from these statistics, it is that people are not petting nearly enough foxes. Those orange-furred, pointy-ear-wearing friendos are just sitting there waiting for us to pet them. If we are shown these stats further into the game’s lifetime, I want to see better numbers, people! Ghost of Tsushima is available now exclusively on PS4.

What kind of stats in other games are you curious about? Let us know in the comments below.

Ghost of Tsushima Devs Have No Plans for More Content
Next
Diablo Immortal Still Totally Happening
Previous
Why Star Wars: Squadrons Will Only Cost $40