Crystal Dynamics has received a bit of backlash in the wake of the Spider-Man exclusivity deal on PS4 for Marvel’s Avengers, but fear not! They have fixed it! Sure, PS4 owners may be getting earlier access to the beta, and sure, they may get Spider-Man as a free character in 2021, and sure, they may have access to timed exclusive emotes, nameplates, and outfits, but certain customers for certain mobile phone carriers are getting their own outfits. That’s right, if you are a Verizon/Virgin or Intel customer, you can get your own set of outfits for the Avengers. 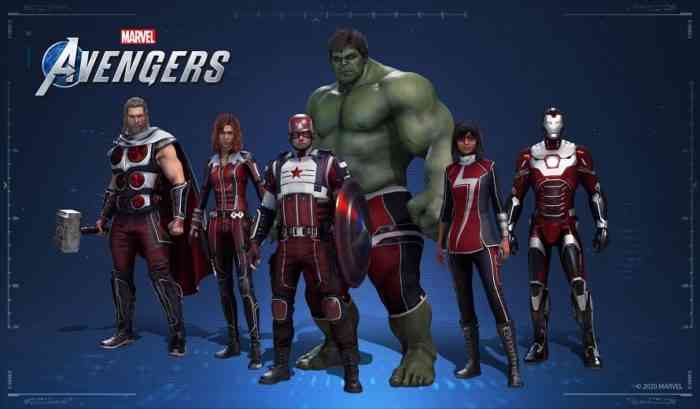 In some crazy, alternate universe, the Avengers accept a sponsorship from Verizon instead of Stark Industries. Verizon customers, or Virgin Mobile in Canada, can have their Avengers decked out in Verizon’s colors Red, White, and Black. They actually look alright if you can disconnect the reminder that they are Verizon’s Avengers. Intel customers get treated to an outfit set that looks like they belong to the off-brand Avengers, the Avorngers. These costumes make the team look like they were sent a cease and desist order from the real Avengers before assembling. I mean, ensembling. Don’t want to violate that order.

So, PS4 owners have Spider-Man, but we have Verizon’s Avengers and the Avorngers. I’d say we’re all squared up, right? Marvel’s Avengers will be available on September 4th for PC, PS4, Xbox One, and Stadia.

Do you like any of these costumes? Let us know in the comments below.