Epic Games Is Taking Apple to Court Over “Monopolistic Practices”

Mega-popular battle royale Fortnite has marred the skin of tech giant Apple. This came about when Epic Games tried to circumvent Apple’s cut of the in-app purchases, by offering discounts on V-Bucks by buying directly from Epic Games. Apple retaliated by removing Fortnite from the App Store. Epic Games has now officially filed legal papers to take Apple to court over “anti-competitive restraints and monopolistic practices”. If legal proceedings weren’t enough, Epic Games has also made a short animation spoofing a spoof of the movie 1984, which is an adaptation of the George Orwell novel 1949. It’s a whole thing. 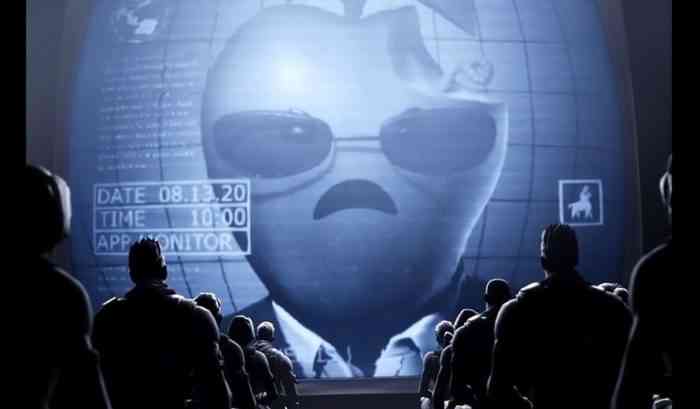 For anyone familiar with the film 1984, which rules out pretty much the entire Fortnite audience, you will see the striking similarities between the film and the short. It shows a bunch of Fortnite characters filed into a viewing room where they watch an embodiment of Big Brother (with the head of an apple) telling them about conformity under the guise of unity. A female Fortnite character rushes in, followed by guards, and hurls a hammer at the screen with Big Brother on it, shattering it. She walks off with capturing the attention of everyone. The short is followed by a message from Epic Games that Apple has become a dictatorship of in-app purchases with the hashtage #FreeFortnite.

The biggest irony is that this Fortnite animation is a near shot-for-shot recreation of a 1984 Apple commercial for the Macintosh that debuted during the 1984 Superbowl. The estate of George Orwell sent Apple a cease-and-desist letter for the commercial and it was never aired again. Now it has come back around to Apple with Fortnite. Though Epic Games is calling upon its fans for support against Apple, many are skeptical of their legal claims. Fortnite is available on PC, PS4, Xbox One, Nintendo Switch, and mobile devices… some of them.

Who do you think has a better legal claim, Apple of Epic Games?

Death Stranding is Free on PC, Today-Only on the Epic Games Store
Next
Control Gameplay of Alan Wake DLC Streamed By Remedy
Previous
Bless Unleashed is Coming to PS4