With August just a few days away, Xbox has revealed the new games it will be offering for free to its Xbox Live subscribers. This month, Xbox will be giving away two original Xbox games alongside a pair of Xbox One titles. 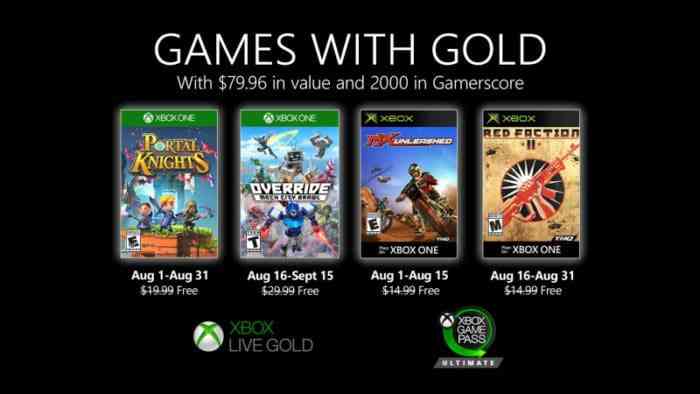 Over on the Xbox news page, the company announced, “Get ready for the Games with Gold August lineup! On Xbox One, shape your hero and your destiny in Portal Knights and level buildings with gigantic battling robots in Override: Mech City Brawl. On Xbox 360, and Xbox One via Backward Compatibility, perform sick stunts in MX Unleashed and save the commonwealth from a ruthless dictator in the classic first-person shooter Red Faction II.”

With an estimated retail price of each game being $14.99, $14.99, $19.99, and $29.99, Xbox Live subscribers will save over $79 US if they choose to pick up all four titles. While Portal Knights and MX Unleashed will be available at the beginning of the month, Xbox users will have to wait until August 16 to download Override: Mech City Brawl and Red Fraction II.