This Is Not How the West was Won

Never underestimate the power of gamers. They will go to extreme lengths to stand out and be heard. They have an entire community devoted to who can beat games the fastest, the investment that goes into games eclipses even Hollywood films, yet a lot of people still see gamers as a bunch of clowns. Well, they won’t be laughing when they see how players hold protests and demonstrations on a game’s digital platform where they send their message by dressing up as… clowns. That is what is going on right now in Red Dead Online. 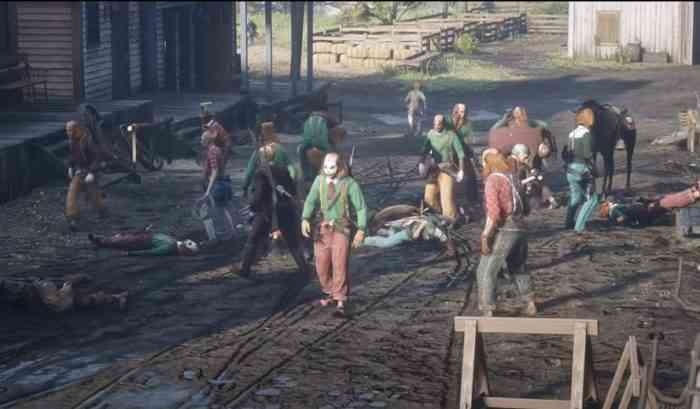 Rockstar has built wildly popular online games in GTA V and Red Dead Redemption 2. However, the latter game has not received the same level of attention as cash cow that is GTA V. If you can believe it, the last major update was the Moonshiners update way back in December 2019. That was back before the coronavirus pandemic. That was back when Kobe was still alive! To draw attention to this lack of new content, players have taken to dressing themselves up to look like clowns. This clown movement is one of a few community-made events organised on Reddit and Discord.

Unfortunately, the unofficial event comes to an end today, but if you truly believe that Rockstar is coming out with a new update soon, you can be a clown on the inside for as long as you want. Seriously though, Rockstar. Just do a Wild Wild West DLC with a giant steampunk metallic spider and call it a day. No one wouldn’t want that. Red Dead Redemption 2 is available now for PC, Stadia, PS4, and Xbox One.

What would you like to see in Red Dead Online DLC? Let us know in the comments below.