Panzer Paladin is definitely one of those games with a retro look, but is not afraid to add modern sensibilities to the 21st century 16-bit game trope. It is a 2D action-platformer like Metroid. The player controls the Paladin armor called Grit; reminiscent of a mobile suit from the Gundam series, with a Paladin-sized sword. Like all mech-fighter stories, the action is about the giant mechs, but the drama and narrative is about the pilots. Well, in Panzer Paladin, the pilot Flame can eject and do some fighting of her own with her own abilities and weapons. 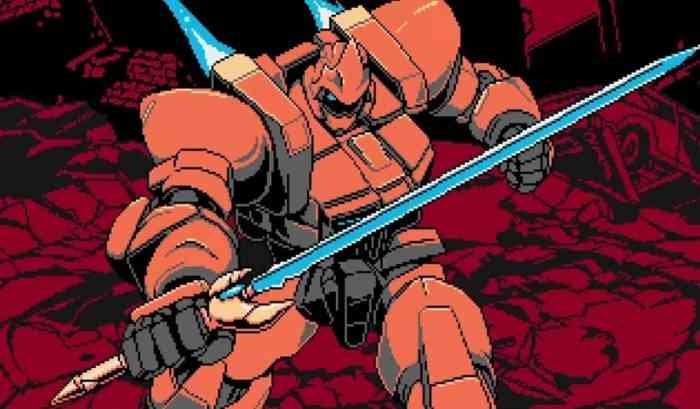 The launch trailer for Panzer Paladin has a very 80s feel to it. It has some pretty rad power metal playing in the background, the game is shown to be playing on an old CRT TV with flames surrounding it, and the announcer sounds like he’s selling a toy. The trailer shows off the various features and opportunities in the game like the play-style and the ejectable pilot, but one of the coolest things about it is the weapon customization. A lot of games have that feature, but Panzer Paladin actually allows players to create their own melee weapon from scratch. Using a pixel-art tool like, players can make whatever kind of melee weapon they want, like a fork or spear or hammer or oar or anything that they want.

2D action-platformers are known to be quite popular in the speedrunning community, so developer Tribute Games has their own speedrun mode for Panzer Paladin. Panzer Paladin is out now for PC and Nintendo Switch.

Does Panzer Paladin look like the kind of game you would like to play? Let us know in the comments below.