Brawlhalla Gets Crossplay With Mobile Fans

Ubisoft’s free-to-play fighting game Brawlhalla is officially releasing for mobile next week. Brawlhalla features 2D Smash Bros. style multiplayer fighting with characters such as Rayman, Shovel Knight and Hellboy. Ubisoft recently confirmed that Brawlhalla will be releasing for iOS and Android on August 6th and crossplay will be supported across the mobile, console and PC versions of the game. Gamers that pre-register for the game ahead of the release will be able to unlock an exclusive skin to use in-game when it releases. Brawlhalla is currently available for free on PS4, Xbox One, Nintendo Switch, PC and Mac. 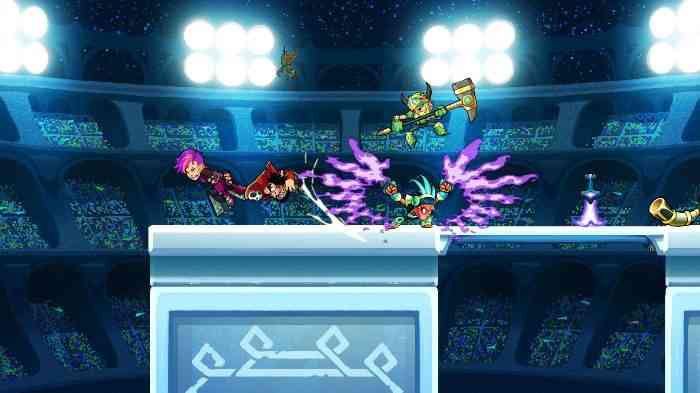 The mobile version of Blue Mammoth Games’ Brawlhalla doesn’t seem like a drastic downgrade from the console and PC version, with the visuals looking nearly identical in the trailer. The trailer touts an existing player base of 40 million gamers who already play Brawlhalla and the ability to crossplay with the existing fans day one when it releases for mobile in August. The game will release with 50 Legends to choose between on mobile devices, giving mobile gamers a large variety of characters to choose between right off the bat.

Blue Mammoth Games’ Brawlhalla initially released for PC and Mac in 2014 and then eventually wound up on current-gen consoles and now it’s releasing for mobile devices. The community has slowly grown over the years and the crossplay between every platform in August will continue to raise the bar for Ubisoft’s free-to-play. Pre-registering for Brawlhalla mobile gets you an exclusive skin but the battle pass and skin shop will be on mobile when it releases, so gamers will have plenty of opportunities to catch up on their skin game.

Will you be trying Brawlhalla mobile next month? Let us know in the comments below!

Ninja Has Been Added to Super Smash Bros. Ultimate
Next
Stardew Valley Is Getting a Physical Release On Switch
Previous
Choose How to Hunt in Red Dead Online: The Naturalist