WWE Superstars are Added as Brawlhalla Characters in New Patch

Since its release in 2015, the free to play fighting game Brawlhalla has added a lot of recognizable characters (kinda) to the roster. These characters are often labelled as “crossovers”. Now, I say “kinda” because they are in there, but they are as skins of existing characters. Still, it can be fun to beat up on people dressed up as your favourite characters. The crossover skins include Finn, Jake, and Princess Bubblegum from Adventure Time, Mad King and Mogar from Achievement Hunter, as well as Shovel Knight, Black Knight, Plague Knight, Specter Knight, and King Knight from Shovel Knight. In the new 3.47 patch, we can now play as Brawlhalla characters with WWE superstar skins. 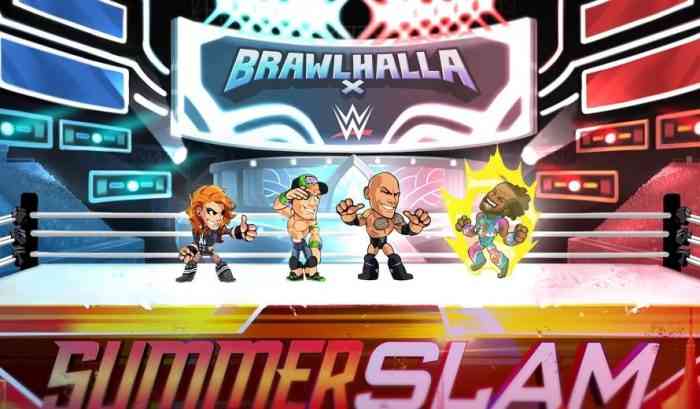 The superstars include Dwayne “The Rock” Johnson, John Cena, Becky “The Man” Lynch, and Xavier Woods. While they are based off of existing characters with existing movesets, but they do have their own signature moves and lock-in animations. As Brawlhalla makes use of weapons, The Rock gets his own in the shape of an elbow, because The People’s Elbow. All the superstars get their own weapon skins like a WWE branded steel chair. The crossover also includes a new stage, or should I say ring? The stage is a wrestling ring inspired by the WWE.

There is also a new 2v2 gamemode being added. Like a tag-team match, but not at all. No tag necessary. Just KO each of the other team three times each and you win. The trailer for patch 3.47 was released yesterday.

Which is your favourite crossover skin? Let us know in the comments below.