Just like with the last Borderlands 3 DLC, Gearbox is preceding its release with some gameplay footage. What is a little different this time is that instead of just showing off the new landscape for Vault Hunters to explore, there are some new yet familiar gameplay elements being shown off in this 15 minutes of footage. The video begins with the demoer playing as my girl Moze, because she’s the best Vault Hunter in the game and I won’t hear otherwise. Moze travels across an area called Blastplains via Jetbeast before entering Ashfall Peaks. 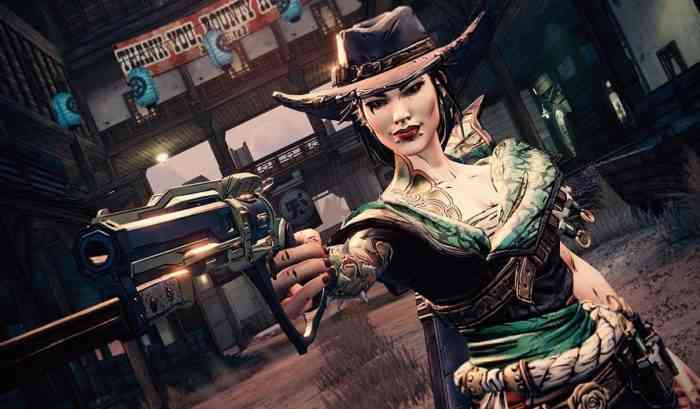 Moze encounters a bandit gang called Devil Riders, saurians, and Devil Rider-mounted saurians. We also see the return of jump pads, which we have seen in Borderlands: The Pre-Sequel. This makes the combat and traversal of the area much more vertical and gives players more chances to use ground pounds, which were underutilized until now. Moze meets Titus, who gives her a melee upgrade called Tech Knuckles. This upgrade allows the player to melee natural formations of volatile crystals called Cores. This is another combat variable where players can melee Cores toward enemies and will inflict elemental damage, similar to how barrels can be hurled at enemies.

The environment resembles what you would see in a Western movie; desert canyons and plains. There are also structures that appear to mix Japanese architecture with Western buildings. While the areas are being explored, a narrator can be heard explaining the history and exposition blended with Western slang. Bounty of Blood will be available to play on June 25th. Borderlands 3 is available on PC, Xbox One, PS4, and Stadia.

Will you be playing Bounty of Blood on day one? Let us know in the comments below.