We got a look at RoboCop in action earlier last week when he went a couple of rounds with Terminator. The two mechanized men faced off to show RoboCops moves off. On the weekend, we were also re-introduced to the Shokan Queen Sheeva with her own trailer. It appears that with the Aftermath characters, NetherRealm is changing up the trailer formula. As with Sheeva’s trailer, the Mortal Kombat 11 RoboCop trailer is narrated by Johnny Cage and gives a bit of a rundown on the character. Dead or alive, you’re coming with him. Probably dead though. 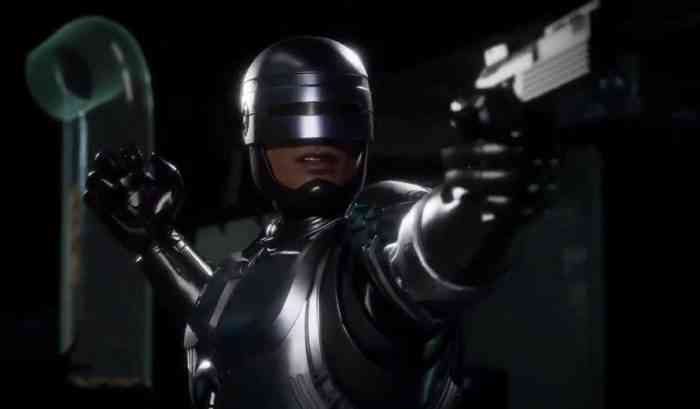 Peter Weller returns to the iconic role as RoboCop. Since RoboCop 2 (1990), Weller has reprised the role for a  series of KFC commercials, but now in all his violent glory. He arrives on the scene in his Omni Corp. Police cruiser. Johnny Cage references the original RoboCop movie tagline: Part man, part machine, all cop. Many of his melee moves are very mechanical and concise, as you might expect from a robot. He also uses his various and iconic firearms for medium to long range attacks. We also see him being backed up by ED 209 in some of his finishers.

Remember when RoboCop shot that dude in the dick? RoboCop’s Fatality references one of the memorable scenes from the movie. He shoots a grenade off his opponent’s face, where it bounces behind them, then he shoots them through the dick to detonate the grenade, blowing them to bits. Mortal Kombat 11: Aftermath is available on May 26th for PC, PS4, Xbox One, Stadia, and Nintendo Switch.

Will you be playing as RoboCop? Let us know in the comments below.

Rumour: WB Games Working With GLAAD on Hogwarts Legacy
Next
Battlefield 6 Could Have Another Version of Firestrom at Launch
Previous
BeatSaber Just Dropped an Update With 48 New Beatmaps