COVID-19 is still rocking and rolling all across the globe. This has lead more and more companies to take actions intended to save people’s lives. Sony has decided to keep people in their houses with video games which…. might actually work? They are pretty damn fun, all things considered. Hence, the Play At Home initiative. 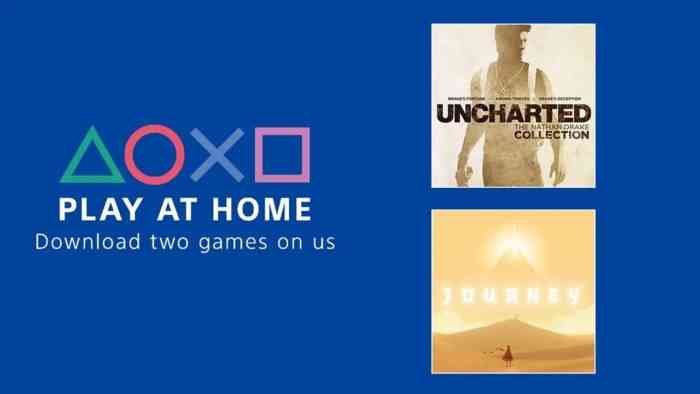 Play At Home is Sony’s digital life preserver, two games offered for free through PSN. Curious players can grab Journey and the Uncharted Anthology for absolutely free from April 15 to May 5. That’s actually four games, not two. Which is an even better deal. The promotion is even poised to help independent developers as well.

How so, one might reasonably ask? Well, they’re not actually connected in a meaningful way. Sony is just socking away 10 million for smaller studios currently struggling in this crisis. The logistics behind this gesture are still murky, but the rules are set to be revealed quite soon. The funds are being set aside for Sony’s “independent development partners,” meaning it’s likely in-house studios and affiliated companies getting the boost. This isn’t confirmed yet, but it would slightly undercut the touching gesture’s authenticity. Keep an eye on the PSN system for when those two games are made available. Both would be an excellent way to pass the time during these quarantine days.