Five girls are fighting for the affections of one lucky/deeply cursed angelic being in Alfa System’s Sisters Royale! Sounds pretty standard for a harem story, until you add all those delicious bullet hell elements. Nothing replicates the stress of dangerous women competing for your favor like dodging thousands of high-speed projectiles. Except for, perhaps, the thrill of snagging a collector’s edition? 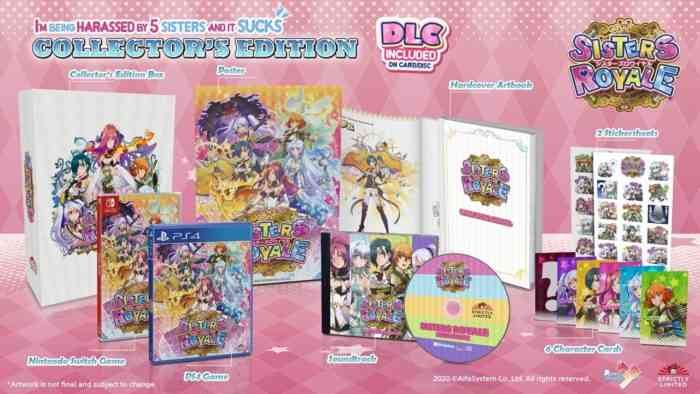 Alfa System and Strictly Limited Games are teaming up to release both Limited and Collector’s Editions of the game for both the Nintendo Switch and the PS4. Every version of this is in short supply, of course, so act fast! I mean, assuming you’re into things like posters, soundtracks, stickers, and character cards. These sweet physical releases are set to ship sometime in either May or June, but the pre-order window is likely going to be a lot slimmer.

The official name for the physical releases is the “I’m being harassed by Five Sisters and it Sucks” edition which, talk about ungrateful, offers some insight into the plot of the game. You play the aforementioned Angel who has been blessed with the unwavering affections of five separate sisters. The first new game from Alfa Systems in 12 years, you’ve got to win the day through point multipliers, distance modifiers, and power-ups. The digital edition of Sisters Royale is available now on the PS4 and the Nintendo Switch. Check out a trailer below!