Welcome to the Friggin’ Guardians of the Galaxy

Oh, baby, a triple! Nintendo and Team Ninja are giving away Marvel Ultimate Alliance 3 costumes like the government gives away bailouts for large corporations. Just this weekend, we have reported on two free costume bundles for Marvel heroes for this game; a bundle for the Defenders and some for the Avengers. Now, we have a costume pack for the rag-tag Guardians of the Galaxy. These packs are all free and all coming on the same day. If you are getting the Shadow of Doom DLC, your heroes will all be looking fresh for the new content. 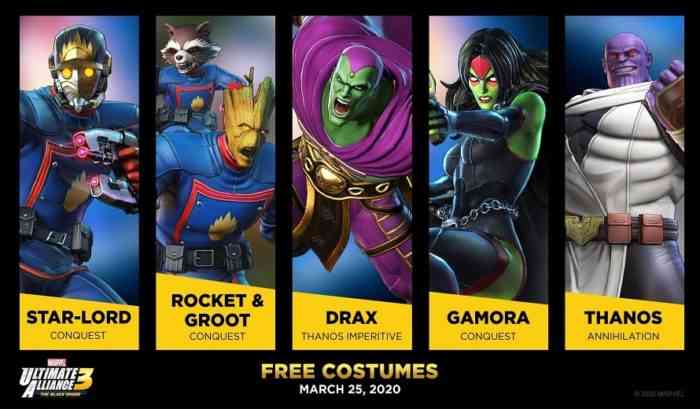 These costumes are for Starlord, Rocket and Groot, Drax, Gamora, and Thanos. Starlord, Gamora, and Rocket and Groot all have costumes from the Annihilation: Conquest story line, which birthed the new Guardians of the Galaxy lineup that we see in the MCU today. Drax’s Thanos Imperative costume is from the Thanos Imperative comic book mini-series in which Thanos and the Guardians of the Galaxy temporarily join forces. Thanos’ Annihilation costume is from the Annihilation comic book series, in which Thanos is a main character. This series precedes Annihilation: Conquest.

The Guardians of the Galaxy are the first playable characters in Marvel Ultimate Alliance 3, but in order to unlock and play as Thanos, the player must complete the Infinity Trails, so at least four of these costumes will be usable right from the get-go. These costumes will be available for download on March 25th for free. Marvel Ultimate Alliance 3 is available exclusively on Nintendo Switch.

Which of these outfits are your favourite? Let us know in the comments below.