Next week, another paid Marvel Ultimate Alliance 3 DLC will launch. There will also be new alternative costumes available for free. Yesterday, even more Marvel Ultimate Alliance 3 costumes were announced for more characters. The ones we reported on yesterday were for the Defenders; Daredevil, Luke Cage, Iron Fist, Elektra, and Deadpool. These heroes getting the more recently announced outfits have stronger connections to the Avengers. They include Hawkeye, Black Widow, Falcon, Wasp, and Crystal. These costumes will arrive the same day as the previous ones. 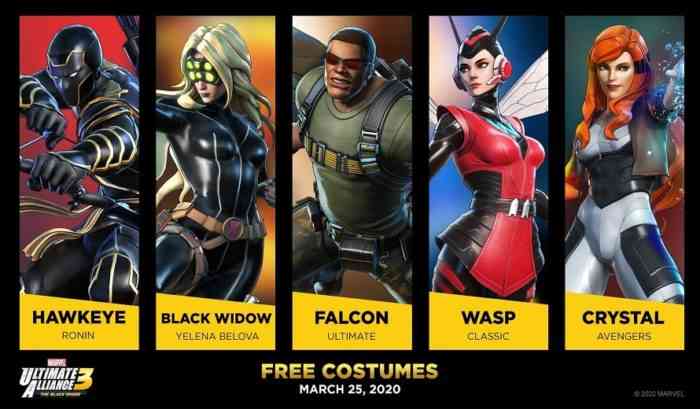 The Avengers are one of, it not the, most high profile superhero groups in all comics. Almost everyone in the Marvel comics universe has been an Avenger at one point or another, but you will probably recognize all of these ones. First, we have Hawkeye’s Ronin outfit. Clint Barton takes on the mantel of Ronin in the comics and trades in his bow for swords. In Avengers Endgame, you can see this version of Hawkeye, but outfit in the game more closely resembles the one in the comics. Black Widow’s alternative costume is the one of Yelena Belova. Belova is Natasha Romanova’s counterpart from the Red Room. She will appear in the upcoming Black Widow movie, played by Florence Pugh.

Falcon’s alternate costume comes from the Ultimate comics. You may also recognize this outfit from Captain America: The Winter Soldier, where Anthony Mackie debuted as Sam Wilson. Wasp is donning her original outfit from the 1960s, when she and Ant-Man wore matching red costumes. Crystal is the more obscure hero of the bunch. She is the first officially hero labelled as an Inhuman. She is the princess of the Inhuman Royal Family and sister of Medusa. She is connected to the Fantastic Four, Inhumans, Avengers, and the X-Men to a lesser extent. She is is wearing her outfit from her time as an Avenger. These outfits along with the Defenders costumes are free and will be available on March 25th, just before Shadow of Doom launches on March 26th. Marvel Ultimate Alliance 3 is available exclusively on Nintendo Switch.

Which of these Avengers is your favourite? Let us know in the comments below.