New Threads for the Defenders with Marvel Ultimate Alliance 3 Costumes

The Marvel universe has many superhero groups that operate at different scales. The most popular is probably the Avengers, who protect the Earth from local and interplanetary threats. There is also the Guardians of the Galaxy and S.W.O.R.D. that face more galactic threats. S.H.I.E.L.D. operate at an international level, but there are street level heroes that band together as well. That is where the Defenders operate. Those heroes are getting some love with the upcoming Marvel Ultimate Alliance 3 costumes focused on the friendly neighborhooding crime fighters. 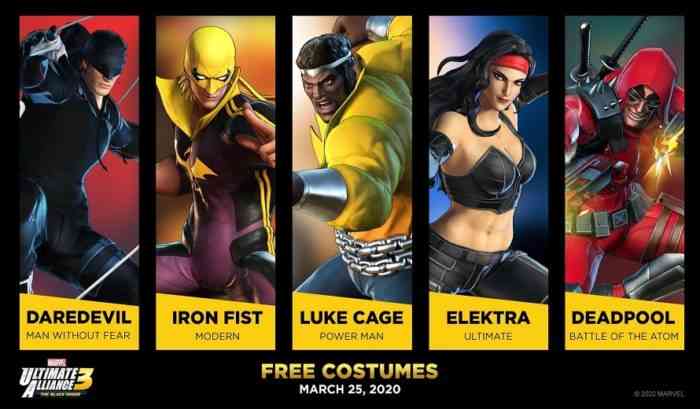 The modern Defenders team mainly consist of Daredevil, Luke Cage, and Iron Fist, with a rotating door of other members like Jessica Jones, Elektra, Colleen Wing, Misty Knight, and others. Though their first incarnation was made up of more high profile heroes such as Doctor Strange, Hulk, and Namor. The Defenders in Marvel Ultimate Alliance 3 that are getting new costumes are Daredevil, Luke Cage, Iron Fist, Elektra, and Deadpool. Daredevil’s costume Man Without Fear is based on the Frank Miller miniseries and was seen in the MCU’s Daredevil season 1. Iron Fist’s Modern costume replaces the classic green with purple and black. Luke Cage’s Power Man outfit comes from his original costume from the 1970s. Elektra’s Ultimate costume comes from the Ultimate Daredevil and Elektra comics. Finally, Deadpool’s new costume comes from the Battle of the Atom comicbook line.

These costumes will be available for download for free on March 25th alongside the paid DLC Shadow of Doom on March 26th. Marvel Ultimate Alliance 3 is out now exclusively for the Nintendo Switch.

Which costume is your favourite? Let us know in the comments below.