The Overwatch Yule Log is Back and Stranger Than Ever

Christmas is tomorrow which means a lot of things. Gifts will be shared, joy will be spread, and Jeff Kaplan is going to blankly stare at a camera. This has become a tradition over the past few years as the head of Overwatch sits motionlessly in front of a fireplace. This is all live-streamed too so you won’t miss a second of the adrenaline-pumping action. 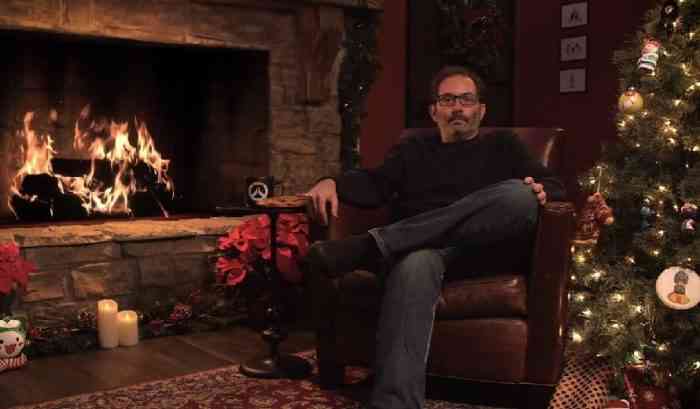 Whatever you might think about Kaplan or Overwatch is beside the point. There is no doubting that this man is driven and has the patience of a Buddhist monk. Last year he was able to sit in front of the camera for around nine hours. There were of course breaks in between where others would fill in. The man has to eat after all. But it is still an impressive feat none the less. Last year’s Yule log event did feature some of the voice actors in the game. For instance, the guy who voices McCree, Matt Mercer made an appearance on the stream as well as some others.

It is definitely one of the more stranger yearly traditions in the gaming industry. But the video game community is known for being a little bit odd and quirky. So it really doesn’t stick out too much.

Overwatch itself is also having its own festive activities. New skins and game modes were introduced with the latest patch. The return of the infamous snowball fight was a welcome return as well as a handful of new skins and other cosmetic items. Make sure you join in while you can as these events are only going to be around for a limited time.

Overwatch is available on the PC, Xbox One, Nintendo Switch, and PS4.