As the Final Fantasy VII Remake inches closer, Square Enix is teasing out little bits to keep us on the edge of our seats. As a proverbial donut on the a fishing line in front of us, new Final Fantasy VII Remake screenshots have been released. We’ve seen the beauty the game has to offer in previously released screenshots, but we get a little more variety in this batch. Menu options, character stills, action sequences, mini games, and even images of iconic set pieces. 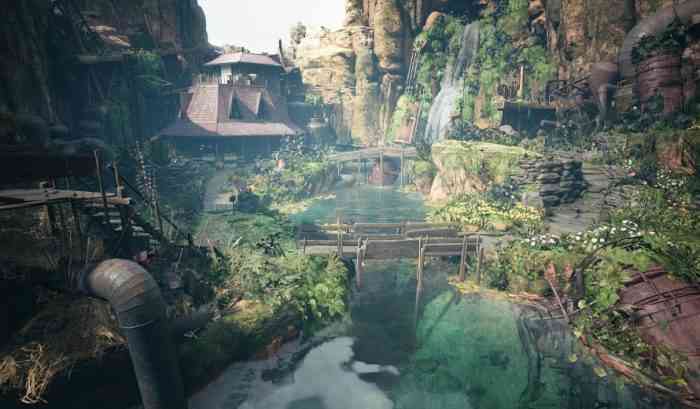 We see images of Biggs, Wedge, and Jessie before they… Well, before the end of the episode. There are also a bunch of stills of our boy Cloud doing what he does to bad guys. What screenshots haven’t shown us before that some of these do are menu options. One of them shows a breakdown of an enemy called Grashtrike; what it drops, the description, resistances and weaknesses. Other menus include standard camera and subtitle menus as well as the upgrade menu for the characters’ weapons. A couple of images show a Summon in action. A Chocobo-mounted Moogle is seen being summoned as well as in battle with what appears to be a meter or gauge denoting how long it will be in effect.

There are also images of some Aerith-related areas. We see her church, the interior of her home, and the exterior. Even though most of the sights of those places were from 1997, we can recognize them with their high res makeovers. Still, what we are really waiting to see is Cloud’s crossdressing disguise. I want to see how Square Enix can make a believable disguise for him to actually fool people. Final Fantasy VII Remake will be out on March 3rd, 2020 for the PS4.

What have you seen in the image that you like most? Let us know in the comments below.


Final Fantasy 7 Remake Part 2 May Be Even Better