“Credits Will Do Fine.” No, They Won’t

Star Wars Episode IX: The Rise of Skywalker is in sight and everyone wants a piece. Rightfully so, as Star Wars is one of the biggest franchises in the history of ever. It would only make sense that Fortnite, as one of the biggest games around, would want to get in on it. After all, Fortnite has already crossed over with Avengers, John Wick, and Weezer. Epic Games has released a short teaser for the Fortnite X Star Wars event. 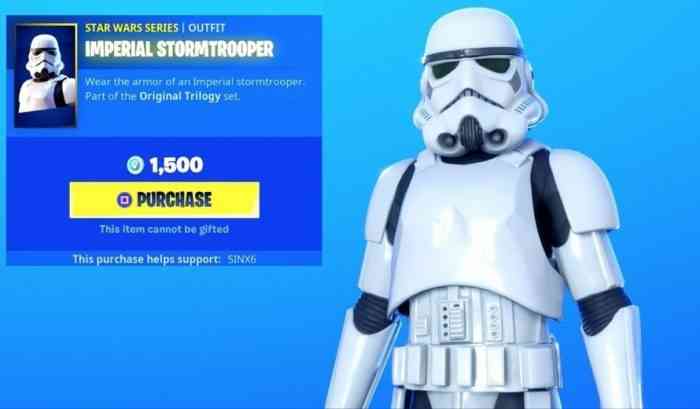 The video starts with a Star Destroyer warping into the sky. The classic Star Wars transition sweeps the screen to show two Stormtroopers. One of them is looking through a binocular visor of some sort and sees the Fortnite crew ready to bust some Imperial heads together. Right now, players are offered the chance to purchase a Stormtooper outfit in Fortnite. The outfit is being offered for free if you have purchased Star Wars Jedi: Fallen Order on the Epic Games Store. If you did not, the outfit costs 1,500 V-Bucks. Also, if you are buying it through the store, you have until November 17th to get it. Those who have purchased Star Wars Jedi: Fallen Order through the Epic Games Store have until November 30th to claim it in Fortnite.

It is unclear if there will be any other Star Wars content coming to Fortnite in a larger capacity. Star Wars Jedi: Fallen Order is out today on PC, PS4, and Xbox One. You can check out our review here. And Star Wars: The Rise of Skywalker hits theaters on December 19th.

Will you be picking up this outfit? Let us know in the comments below.